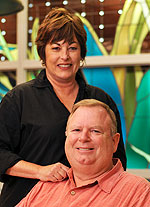 When Craig McMillan found a lump in his left breast while showering in September 2004, he didn’t think much of it. The 59-year-old insurance agent from Quincy, Fla., assumed it was a harmless, fatty cyst like others he had had. But the decision to mention it to his family physician during his annual physical may have saved his life.

“My wife and I were extremely shocked to learn I had breast cancer,” McMillan says. “Like most men, I thought it was primarily a women’s disease, so I was in denial and didn’t think it could happen to me.”

Biopsy results indicated infiltrating ductal adenocarcinoma, making McMillan one of just 2,000 men in the United States who are diagnosed with breast cancer each year.

“Based on my family history, I shouldn’t have been surprised,” McMillan says. His grandmother died from breast cancer, his sister was treated for it and both his parents had lung cancer. National Cancer Institute statistics show that hereditary breast cancer accounts for 5 to 10 percent of all cases of breast cancer in both men and women.

“Like many male breast cancer patients, he comes from a family that shares an abnormal gene that predisposes them to have breast, ovarian, colon or prostate cancer,” says Dr. Alvaro Moreno-Aspitia, his oncologist at Mayo Clinic in Florida.

McMillan had surgery to remove both breasts in early 2005, followed by chemotherapy and radiation therapy.

“I was shocked when my husband’s breast cancer diagnosis was made, since I never heard of men having this disease,” says Jane McMillan. “After the diagnosis, we found out that three other men we know have also survived breast cancer. I guess this is an issue that men just don’t like to talk about.”

Today, in McMillan’s family, awareness propels action. Due to their elevated risk, McMillan’s two children are monitoring their health and watching for any symptoms that could indicate cancer. His daughter is vigilant about doing regular breast self exams and getting mammograms. His son has an annual blood test to check PSA levels that could indicate prostate cancer.

McMillan is cancer-free, but he takes a daily dose of tamoxifen as a preventative and has regular checkups. He has resumed a normal life, working as an insurance agent and enjoying his hobbies — woodworking, golf and occasionally hunting and fishing. To men who find a suspicious lump in their breast, McMillan says, “Get it checked out sooner rather than later, before it spreads and becomes harder to treat.

“And if you are diagnosed,” he says, “you can help get past the initial fear and uncertainty by adopting an I-can-get-through this attitude that, with the help of a supportive family, will make all the difference in the world in your recovery.”

Editor's note: Male breast cancer makes up less than 1 percent of all breast cancer, according the National Cancer Institute. An uncommon cancer in men, it can be just as deadly if left untreated. Unfortunately, it's a cancer that's not often discussed, as this article from the Winter 2009 Sharing Mayo Clinic newsletter explains.