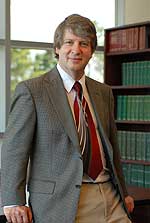 Mayo Clinic investigators have found that measuring blood levels of amyloid, an insoluble protein, can help predict who is at risk for developing mild cognitive impairment or Alzheimer’s disease.

The finding is another step in developing a simple blood test that, coupled with known risk factors, could someday identify people at risk for Alzheimer’s.

“By itself, the test identified individuals who were three times more likely to develop cognitive impairment or Alzheimer’s disease within three to five years,” says Dr. Neill Graff-Radford, who heads Mayo’s Memory Disorder Clinic in Florida and has led the work on the blood test. “But when evaluated with other indicators, such as having a particular gene, the combination of these factors is a much stronger predictor.”

For example, patients in the study who had both a positive amyloid test and one specific gene had a 20-percent chance of developing Alzheimer’s disease within three to five years, Dr. Graff-Radford says.

Mayo Clinic is pursuing predictive blood test research and is recruiting for an ongoing study involving 3,000 individuals. For information about participating in this or other studies, please call 904-953-2677. See the Memory Disorder Clinic Web site for more information.