Not Your Traditional Wedding Anniversary: Husband Donates Kidney to Wife of 30 Years

Still, some devoted husbands may opt to purchase their bride of three decades a special spa day – or an exotic trip to sip a cool drink by an ocean.

In the case of George and Anna Riley, Bloomfield, N.M., their beverage of choice on the eve of their 30th wedding anniversary was strictly cut off at midnight. That was the “stop all food and beverage” deadline before they were both readied for major transplant surgery at Mayo Clinic in Arizona. 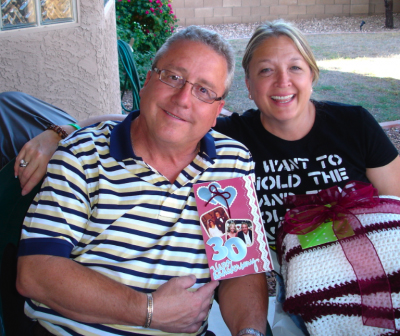 George’s gift to Anna trumped all material things. George, on their 30th wedding anniversary, instead donated one of his kidneys to Anna, 49, who suffers from a genetic disorder that has affected other family members. It became clear early on that Anna would require a kidney from a non-blood relative, so as to not compromise the health of any remaining relatives.

A number of their friends, many from their church, didn’t hesitate to step forward to offer to be tested to ultimately donate the gift of life to Anna. They were prepared in particular for one young church friend to be “the” donor. So it surprised them both when George qualified to be his wife’s donor, and Anna was touched that her husband of all those years would make such a generous and sincere offer.

Fast-forward to surgery day, Oct. 21, 2008, the exact day of their 30th anniversary. In pre-op, the couple’s beds were wheeled together, where they held hands and blew each other kisses. Their three children (Alicia, Amy and GW), son-in-law (Derrick) and George’s mom and stepdad were allowed to come into the area to pray with them. George, 50, “usually the strong one,” according to Anna, succumbed to emotion. “I then switched our roles a bit,” admits Anna. “I had to be strong for him.”

The night before surgery, family members had thrown an anniversary party for Anna and George, even if the food had to be curtailed at midnight. The prospect of Anna having a second chance at a healthy life was all they cared about. Her condition, medullary cystic kidney disease, often leads to end stage renal disease. Anna’s father, after undergoing three kidney transplants, died from the disease in 1991. But it gave Anna hope when she witnessed her younger sister, who has the same disease, go through a successful kidney transplant at Mayo Clinic.

The couple’s faith and church ties are strong, and through friends there, they were able to connect with a family close to Mayo Clinic Hospital that was willing to let them use their home during their recovery.

Along with their strong faith, Anna and George credit Drs. Marek Mazur, Adyr Moss and Ray Heilman at Mayo for their combined successes in their evaluation and surgery. “They were amazing,” Anna notes. George was able to leave the hospital the day after surgery, and Anna, although admitting to soreness, said she felt better immediately when she awoke from the surgery.

And now, a number of months later, “We are both back at work and feel great,” confirms Anna.

Lynn Closway is a Public Affairs Representative at Mayo Clinic.