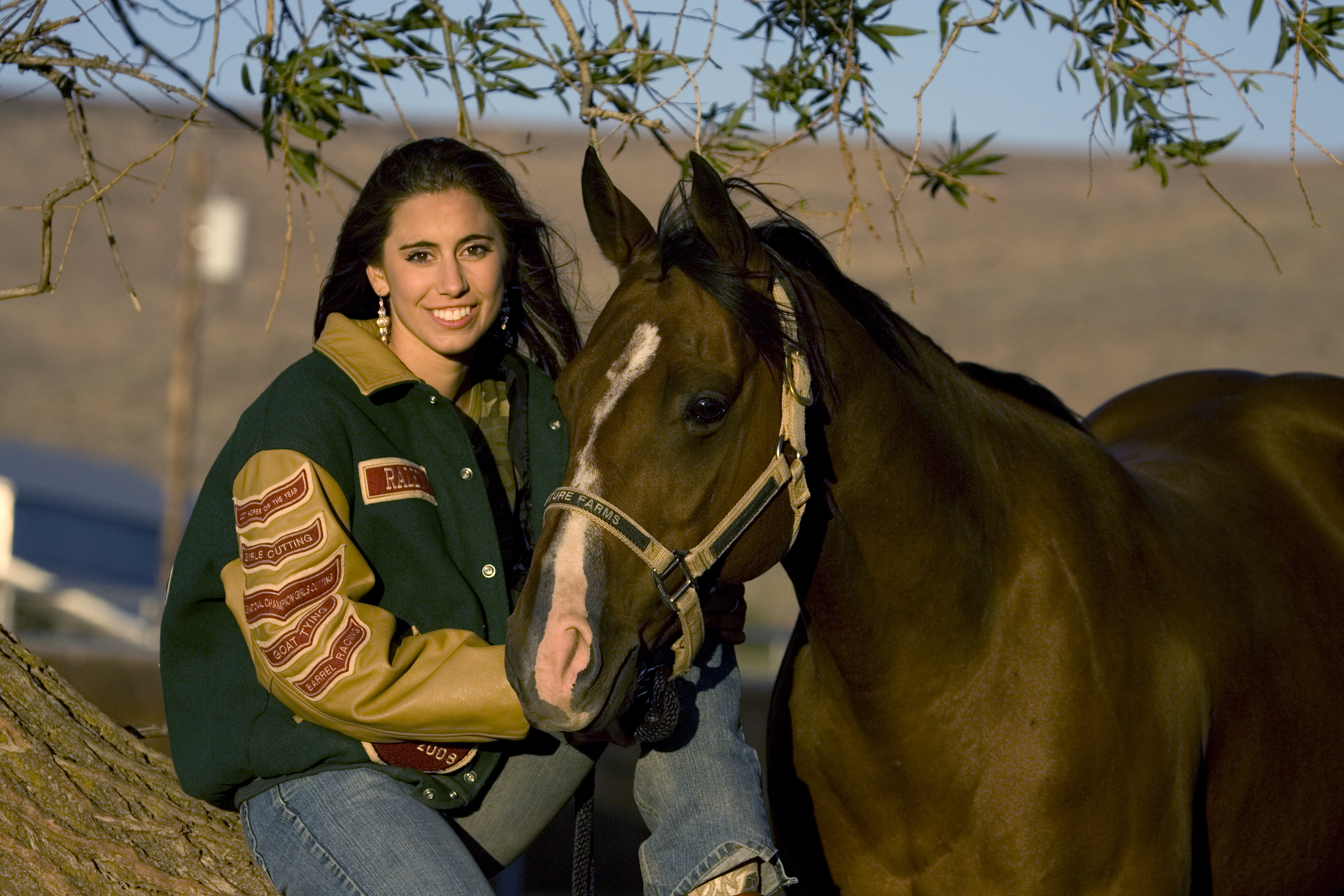 Raley Mae and her horse Harry

Raley Mae Radomske was all set to begin a new chapter in her life the summer of 2009 when the unthinkable happened.

A national rodeo champion, Radomske, 18, experienced a seizure as she was readying for her move from her hometown of Ellensburg, Wash. to Las Cruces, New Mexico to start college.

Days after settling into her new home in New Mexico, an MRI revealed a startling blow.

I found out I had a brain tumor,” recalls Raley Mae, “That (news) will change your life forever.”

“We were crushed and very scared,” says her father Harland. “It (the tumor) was the size of a golf ball.”

Horses have always been a huge part of Raley Mae Radomske’s world. Her parents Jody and Harland “Ske” Radomske own Venture Farms – Caribou Creek Ranch in Ellensburg where they raise and breed cutting, roping and barrel performance horses.

Following in her parents’ footsteps, Raley  Mae says she became enamored with horses at the tender age of three when her parents led her around on a little pony for the first time. She grew up learning horsemanship, cow cutting and rodeo from her parents who are both accomplished cutters.  Cutting is a competition that consists of a horse and rider and a herd of cows, where the rider (cutter) has to complete a specific amount of skills in a set amount of time.

Her accomplishments earned her a full rodeo scholarship to attend New Mexico State University to major in Marketing.

That was Raley Mae’s plan until she started experiencing seizures.

“I had my first seizure in front of my Mom. I didn’t remember having a seizure. I just blacked out. I wouldn’t have known unless my Mom was there to witness it,” Raley Mae remembers.

“It was really scary,” says Jody.  “I had never witnessed a seizure before and I just held her up so she did not hit the floor. I grabbed my phone and called 911.  Then she stopped and slowly started to respond to my questions to her. I was pretty panicked.”

Raley Mae’s father said there were no telltale signs prior to the seizures that anything was wrong.  “She went to the national rodeo finals, attended conferences and ran meetings.  She competed in all her events,” says Harland who said he was worried his daughter might be epileptic when the seizures began.

Harland said the family, which includes Raley Mae’s siblings Jason, 26, and Kyle, 20, wanted a second opinion.  Upon the suggestion of family friend Dr. Brian Chong, who is the Chair, Division of Vascular and Interventional Radiology at the Mayo Clinic in Arizona,  the Radomskes immediately travelled to Arizona to meet with Mayo Clinic surgeon Richard Zimmerman, M.D.

IN FOR THE FIGHT OF HER LIFE

Raley Mae’s tumor presented a strong challenge from the start. The tumor, characterized as a Choroid Plexus Papilloma, was large, accompanied by a large cyst and nestled deep in the left side of her brain.  Its location would eventually affect her speech and ability to understand both written and spoken language, explains Dr. Zimmerman, adding.  “That is especially troubling for a young woman starting college.” If left untreated, the tumor could have become life threatening.

“This type of tumor is uncommon, and occurs in young children, but less so in adolescents,” says Dr. Zimmerman of this rare tumor for Raley Mae’s age group. He explained Raley Mae was able to function as long as she had because certain types of tumors initially grow slowly allowing the brain to adapt to its presence until a critical point is reached.   The Radomskes agreed Raley Mae’s surgery would be at Mayo Clinic.  “We arrived with the notion it (Mayo Clinic) was a superior facility.  We were impressed with the thoroughness,” says Harland.

Dr. Zimmerman says he anticipated Raley Mae’s tumor to be benign, however a pathology report taken during her first surgery revealed her tumor was not typical.  “It appeared more cancerous than we thought,” Dr. Zimmerman recalls.

Since the tumor was not benign as they had initially thought, Dr. Zimmerman says the game plan had to change.  Raley Mae and her family needed to know the risks involved with aggressively cutting deeper into the tumor and getting closer to the brain structures – risks that included stroke.

Dr. Zimmerman said another MRI was taken to determine how much of the tumor was left and that the family opted to continue with an aggressive second surgery later that week to remove the rest of the tumor.

"Both Raley and her family were brave,” remembers Dr. Zimmerman. “They had faith in their religious beliefs and faith in Mayo Clinic"

During her next surgery, Raley Mae’s parents learned the tumor began to bleed heavily.

“My wife and I immediately asked for a pastor and we prayed with him (at Mayo Clinic) for five hours,” recalls Harland.

“They (the staff) not only provided quality care, they really make you feel like they are interested. They are not just doing their jobs, they are really caring people.”

“Nora Vetto, the operating room nurse, was excellent in her job of reassuring us, letting us know what to expect, showing us compassion and helping us to maintain our confidence,” says Jody. “She genuinely cared. She was exceptional.”

Upon waking from surgery Raley Mae wasn’t able to speak and was paralyzed on her right side.  “There were signs of hope the paralysis wouldn’t be permanent,” says Dr. Zimmerman.

A few days later, Raley Mae’s family and her team of Mayo Clinic caregivers experienced that  hope first hand.  After returning from dinner, Raley Mae’s parents and brother Jason saw her clench her right fist and raise her right leg in bed.

“We walked into her ICU room and she showed us what she could do,” Jody remembers. “My husband and I started crying and praising the Lord. We were so overjoyed. It was such as happy moment. We felt like we were going to be alright now.”

"There was no question we expected to see recovery, but to happen like this (so fast) was an uncommon phenomenon" says Dr. Zimmerman.

THE ROAD TO RECOVERY

Raley Mae’s battle to regain her life as she knew it was only beginning.

“She had a global deficit in function. She had difficulty with visual perception; she had difficulty communicating and needed help with self care and mobility,” recalls Carolyn Kinney, M.D., a specialist in Physical Medicine and Rehabilitation at Mayo Clinic.

““When I saw her the first day, she was in pain. She didn’t want to get up, she just wanted to sleep,” remembers Bernadette Luberda, a Mayo Clinic occupational therapist who was assigned to help Raley Mae with her daily rehabilitation.

Raley Mae connected with Bernadette when she realized  they had something in common.  Bernadette overcame a brain tumor was she was 16 years old and could relate to the frustration Raley Mae was dealing with in having to re-learn basic life skills most people take for granted.

At the start of her treatment at Mayo Clinic’s inpatient rehabilitation unit, Raley Mae – a world class athlete – needed a walker to lean against to help her get around.  She needed to re-learn how to dress herself and complete once mundane tasks such as counting money, crafting an e-mail and applying the eyeliner she loved to wear.  What used to take mere minutes to do, now could take an hour or more.

“Sometimes she would start crying. I would tell her it may take longer, but at least she was doing it herself. It was incredible to see her overcome the obstacles,” says Bernadette.

Part of Raley Mae’s rehabilitation also included practicing her rodeo skills.  Her family brought her a roping dummy (fake calf) and lariat rope so she could practice roping and work on regaining her coordination. Raley Mae would practice her rodeo skills on a patio outside Mayo Clinic Hospital on the Phoenix campus.

Bernadette says Raley Mae regularly shared her determination to help motivate Mayo Clinic’s other patients who were undergoing their own physical therapy.

“We have a group called ‘the breakfast club’ of patients who need rehabilitation.  They would eat breakfast together every morning. Raley would sit at the middle of the table and talk to all the patients and encourage them.  She told them what she had been through and not to give up.  Everyone looked up to her,” says Bernadette.

Raley Mae admits she is not positive all the time and still has moments when life’s daily struggles get her down.  But she says the heath scare has humbled her.  “It taught me be thankful for what I’ve got.”

BACK IN THE SADDLE AGAIN

Raley Mae’s hard work in rehabilitation  paid off. After a month of living at Mayo Clinic, she was given the go ahead to return to New Mexico and resume her studies.

“She is diligent and always had a hard work ethic She made a remarkable recovery and continues to make incredible progress,” says Dr. Kinney.

Since her tumor was characterized as  atypical (neither benign nor malignant) and  there is always a chance for recurrence, Dr. Zimmerman and the staff at Mayo Clinic are keeping a close watch on Raley Mae, requiring her to come in for regular check-ups every six months

Now 19, Raley Mae is in the midst of a busy semester at school, carrying a full courseload which she balances with the speech and physical therapy sessions that are provided to her at school.

And she’s back in the saddle.  In fact, she’s even given Dr. Zimmerman a special tribute. Raley Mae re-named  her barrel horse “Dr. Z.”  after the doctor she credits with helping save her life.

Raley Mae was cleared by her Mayo physicians last fall to ride Dr. Z and is working her way back up to being able to compete for her college rodeo team again.

She says nothing was ever going to keep her away from riding.

“It would be like trying to live without water,” says Raley Mae.

Please click on the following link to watch Raley Mae describe her care at Mayo Clinic.