Five Stars in Any Language

Marlow and Frances Cowan, the Ankeny, Iowa couple whose impromptu piano duet in the Gonda building atrium at Mayo Clinic has been seen more than 7 million times on YouTube, are now officially international media sensations.

Their original duet, which was captured by another patient, posted to YouTube by her daughter and posted to Sharing Mayo Clinic a year ago Wednesday, led to them being flown to New York in May to appear live on ABC's Good Morning America.

Their return concert in February, which was covered by several Minnesota TV stations, led to their appearance Sunday night on NHK, Japan's largest television network, based in Tokyo. 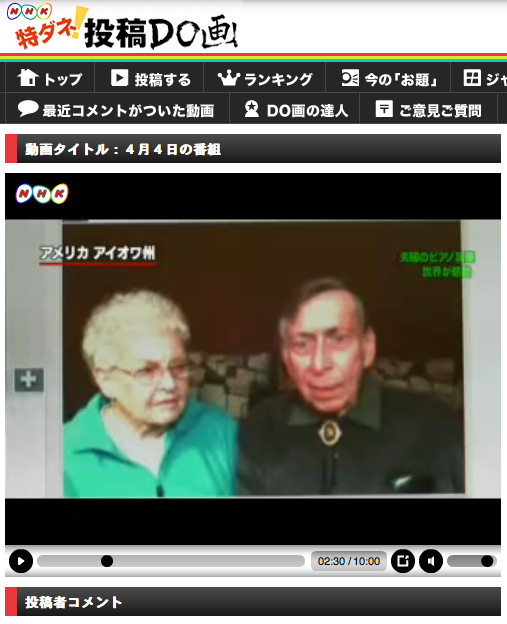 Frances and Marlow Cowan via Webcam to Japan

To see the Japanese piece, click this link and skip ahead to the 1:20 mark.

The Des Moines Register also has a nice follow-up column about the Cowans and their adventures of the past year.

Some videos don't translate well culturally; for instance, I don't understand what is funny about the black cat story that preceded the Cowans on NHK.

But as you can see by watching their international TV debut, the Cowans are five-star performers world-wide, in any language.