Sharing a Love for Running

My story began in November 1993 when I was referred to Mayo Clinic with two abdominal tumors that were potentially cancerous.

No tests indicated cancer, but as I was prepared for surgery, I was told that pathology would examine the tumors. If there was cancer, I might lose one or both kidneys because of the tumors proximity to my kidneys. Whew I was scared! I wasn’t yet 40 years old and had two children who could still use a Mom person in their lives. Also, the tumors were growing with peripheral nerves and the spine. Surgery was scheduled for January 1994. 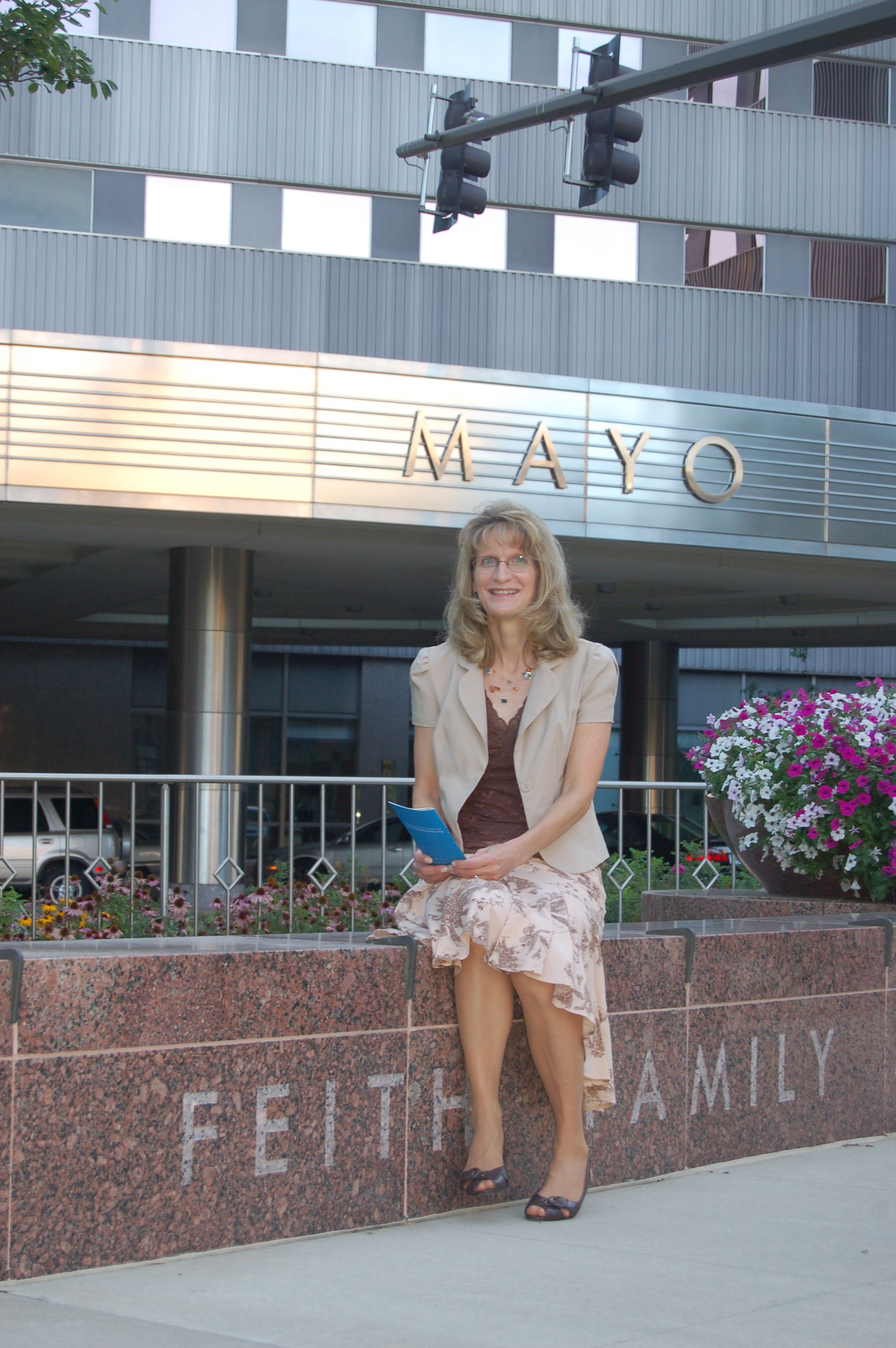 I had the most interesting and wonderful neurosurgeon, Dr. Michael Ebersold. He explained possible disabilities resulting from surgery because of the nerve involvement. He actually demonstrated (wow) how the disabilities might affect me, and my ability to walk. With Dr. Ebersold and Dr. Michael Farnell, my surgery was a success story - no cancer, no kidney removal and the most wonderful part of all – no disabilities!

My children and I were evaluated for Neurofibromatosis by Dr. Virginia Michaels in Mayo’s Genetics department. We did not fit the criteria, but in 1994 there was not a lot known about the Neurofibromatosis disorders.

My Mayo experience drifted away from my mind as my life went on. Thirteen years passed since my first visit to Mayo Clinic, and I expected my relationship with Mayo to be the occasional glimpse of the buildings whenever I visited my grown son living in Rochester, MN. Midway through those years, I developed a love for running. I was pretty active, so it was quite a surprise when in May of 2007 I was again referred to Mayo Clinic. The tumors had returned and were causing slight left kidney failure.

Dr. Ebersold had retired and a new doctor recommended a plan for me that involved urological stents and waiting 1-2 years before surgery. I didn’t do well with the stents, and perhaps he might have favored a new plan when I saw him again in August 2007. However, he left the Mayo Clinic sometime before my August appointment.

I was a little apprehensive about what would happen next. I felt most comfortable with a primary physician who would be calling Mayo home for a while. In September 2007, I requested and received an appointment with Dr. Robert Spinner, a neurosurgeon who specializes in peripheral nerve surgery. He recommended not waiting 1-2 years for surgery, and his staff called me with a possible surgical date for the end of January to February 2008. With one last urological stent in place, I had just enough time to wait until June when I would have more time off from my job.

In June 2008, about 14 years from my first visit to Mayo Clinic, I had abdominal surgery to remove the tumors causing kidney failure. Dr. Spinner and Dr. Matthew Gettman, a urology surgeon, had a plan for me that was very successful! The left kidney was intact, no reconstructive surgery was needed, and no nerve damage resulted from the tumor removal. I felt so well; I think I could have gone for a run within a few weeks of that day!

In July 2008, Dr. Spinner removed the tumors from my spine. I left St. Mary’s twice that summer on beautiful, sunshine-filled, warm days. I walked out with no disabilities.

After my last surgery, I received a “gift” that may have even surprised Dr. Spinner! I had intermittent left leg pain that was progressively getting worse for nearly 4 years before my July surgery. I thought it was a lingering injury related to running. After my surgeries, the pain went away! I often think about how incredibly wonderful it is to no longer live with almost constant pain. I truly feel that I am one of their success stories.

Dr. Spinner recommended genetic testing, and Dr. Dusica Babovic-Vuksanovic arranged everything for me. With genetic testing, I learned that my tumors are because of Schwannomatosis, a disorder in the Neurofibromatosis family. My case is not inherited genetically, but is instead a genetic mutation. This could happen to anyone, in any family, and appear at any age.

All in all, I’ve had five outpatient surgeries at Rochester Methodist Hospital, two major surgeries at St. Marys Hospital, and many appointments, tests and scans from May 2007 to August 2008. The staff that cares for you in the clinics and hospitals is incredibly kind and helpful. The nurses in outpatient urology at Rochester Methodist almost became family. I brought them cake from the Hayward Bakery for my last surgery. Dr. Spinner’s assistant, Kirsten, often spent time talking with me, knowing when I needed a “connection”. Dr. Spinner and Dr. Gettman made a big difference in my life, as I expect they do each and every day at Mayo. They truly have a gift they share.

In November 2008, Dr. Spinner gave me the “go ahead” to start running again. With my three surgeries, I feel I have been able to “come back to running” three times now. I feel that the Lord must have a plan for me that includes running. After all that’s been done, and at the age I am now, it must be a “gift” that I can still run, bike, and snowshoe - things I love to do.

In March 2009, I joined the NF Endurance Team, a fundraising arm of the Children’s Tumor Foundation. In my first year, I participated in 14 running events. I began my second year in March 2010. I hope I can make a difference in the lives of adults and children with NF 1, NF 2, and Schwannomatosis by raising awareness and donations for research and patient support.

Currently, there is no cure! A cure will be in the next step, the next mile.

Thank you for sharing my story, Roxanne Thomas