I don't even know how to begin to tell this story, but I know I have to write down what has happened in my life over the past few years. It has been a roller coaster ride with new situations and events like never before. 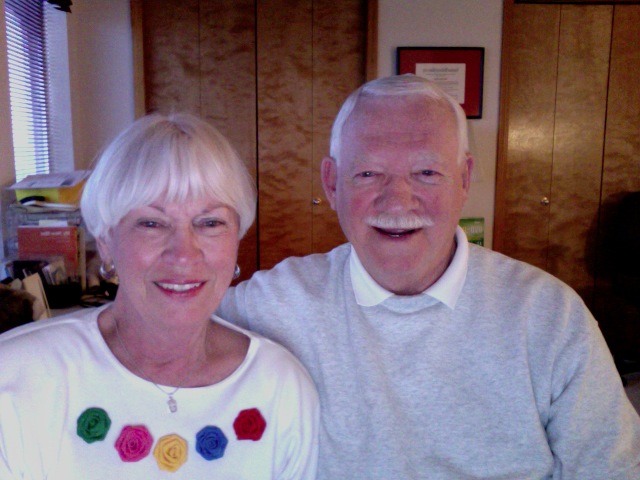 In April 2005, while camping with my husband Noble and our dog Sam and cat JoJo at Lincoln Rock State Park, I had a weird vertigo experience which passed quickly but then some slight dizziness reoccurred off and on for about a year. After seeing several doctors I was diagnosed with an inner ear virus which they said would go away and it did.

However, by May 2006, I was having trouble walking -- my legs would not work correctly, and it became progressively worse so that I had to quit playing tennis (3x a week) and jazzercise (4-5x a week). Finally, I could only get around with the help of a cane and Noble's arm.

I saw several doctors both here and in Seattle over the course of time between the summer of 2006 and January 2007, including four different neurologists. No one seemed to be able to diagnose my deteriorating condition. By now the fine motor coordination in my left hand was affected, at times my speech was slurred, and the stiffness in my legs made walking extremely tiring and difficult. I had a multitude of tests -- more than you'd care to hear about -- MRIs, CT mylograms, bone scans, blood tests, spinal tap,VEP, EMG, EEG, and on and on .... I had gone from a very healthy and physically active person to a very handicapped one. My whole life had changed.

Noble and I finally made up a name for my illness since the doctors couldn't seem to identify it. It became ESCP (Edie's Spinal Cord Problem) -- not exactly a medical term.

Along the way I'd been told by one neurologist I had primary progressive M.S. and then another neurologist in Seattle finally gave me a diagnosis of Devic's disease or NMO (neuromyelitis optica). He made his decision from a lesion on my thoracic spine seen in the MRIs. He sent a blood test specific for this disease away to the Mayo Clinic who were the authority on this disease, but he added even if it came back negative he still believed this was my problem. He started me on Imuran, an anti-inflammatory medicine.

The blood test came back negative for Devic's and the local neurologist didn't agree with this diagnosis but would not commit to anything else for certain. Noble picked up the phone and called Mayo in Rochester, MN. They were the most knowledgeable about Devic's disease from all the research he had done.

On March 19, 2007, we flew to Rochester for a week's evaluation in the neurology department. What an experience that was! Two doctors met with us initially and scheduled me for all the same tests I had already had over the past year and a half (plus some more) while trying to figure out what was wrong with me. At the end of the week of re-testing I was told for certain I did NOT have Devic's, I DID have a copper deficiency which could cause spinal cord problems, and there was a possibility of Primary Progressive MS which was NOT treatable. I was also told to stop the Imuran since I didn't have Devic's and to start on a copper supplement. The doctor then asked me to get one more blood test done
before leaving Rochester, which I did on Friday. On Monday morning I received a call from the Mayo doctor saying they had the results of that last blood test and were surprised at the results indicating I had a rare GAD65 antibody in the blood affecting the spinal cord and brain stem. Like the copper deficiency this, too, WAS treatable with IV steroids and Imuran long-term ... wow... what a blessing to have something treatable. They now believe Primary Progressive MS is unlikely. They said get back on the Imuran and begin IV steroid treatments immediately for five days in a row and then once a month for each of the next four months.

I have returned to the Mayo Clinic in Rochester for several visits since 2007. The most recent was this summer. My doctor (Dr. Pittock) said they had hoped only to stabilize me, but that I've made such good improvement that I don't need to return for 18 months to 2 years. We are so grateful for the excellent treatment and coordination between the doctors at the Mayo Clinic who were able to provide a successful treatment plan for me. Thank you Mayo Clinic from the bottom of our hearts.

The God things that have meant so much to me follow:

Noble had retired January 7, 2006 and had major back surgery on January 11, 2006. I was able to help him recover from that BEFORE my illness became a debilitating situation where he had to assist me in just getting around.

The Mayo doctor we were assigned JUST HAPPENED to be the author of a research paper newly published in 2006 on this GAD65 antibody marker test. The doctor in Seattle had given me the Imuran starting in January, so I was only off it for 3 or 4 days before Mayo told me to get back on it. The Devic's was OUT of the picture, and it was a horrible disease God removed that one. I now had a treatment plan for this rare illness as well as the copper deficiency.

There were several serendipities along the way. Just to mention a couple while at Mayo, one day we were sitting in a waiting room for an appointment and an attractive young woman got up and came over to us from across the room. She said she had noticed how lovingly we were treating each other and wondered if we were believers. She saw Noble's Promise Keepers logo on the front of his shirt and said she knew it when she got over to us. What a sweet serendipity and encouragement that was to us. I told her she should have seen us earlier that morning arguing over the way to get to the right office in the building!

And the nurse who did the spinal tap was open to my sharing about an estranged son of ours as she had some difficulties with a daughter and wrote down the book I recommended to her that helped me by Navigators Jerry and Mary White called "When Your Kids Aren't Kids Anymore.” I know she will get it as she very carefully wrote all the information down, and we had a wonderful talk. I don't think she was a Christian, and she will get good counsel from this book.

And there was the medical technician who seemed surprised when I told her what I had done to occupy my time during all those MRIs of the back and brain -- praying and singing "Amazing Grace" and reciting Phil.4:6-7 to myself. She said "Meditation is good."

There was a woman MD at Mayo who was dictating her notes about me while we were sitting there with her. I remembered another previous Seattle doctor's notes we had read that cheered me up as they said I was a "pleasant woman looking much younger than her years." So I said to her, you can add something like that in your notes and she did! We all got a laugh out of that one.

During the past year or so, I have had so many wonderful friends praying for me and with me ... some through small Monday night groups at church, some came to my house to pray over me, family members and other friends from all over the country have prayed, e-mailed, sent cards and words of encouragement and support , phone calls, etc... One friend even fasted on my behalf on a regular basis. I didn't realize the depth of care and concern they had for me. It has been humbling and such an example of love -- God's love. The elders of the church laid hands on me and anointed me with oil for the first time in my life. That was a huge encouragement to me.

I had a wonderful message from God last Monday night as I was talking to Him and reading a daily devotional book - I finally "got it" - and I am THANKFUL for this whole difficult experience as I have grown closer to Him, to Noble and to so many other wonderful friends in addition to gaining new empathy for the disabled/handicapped. I have a new appreciation for the love He has shown me through others. If I could take it away I wouldn't have changed anything for this experience. I was just living my life and then God had a detour for me to learn some new things and understand Him better. He has things to teach me through these hard times that I may not have learned any other way. I know now how to share His love with others going through similar problems. His love has been demonstrated to me over and over again through this situation. I knew much of this in my head but it finally broke into my heart, and I will be forever grateful for this illness and God's loving care for me through it. I would not trade anything for this whether I am healed or not. I have been truly blessed. EdieA

What a great story… I’m so glad you had your true answer.I need to schedule an appointment at mayo clinic, as they are simply the best!! Peace to you and your hubby..

This is a wonderful story about how God works. His mysterious ways. My son called last week to tell me he has been diagnosed with MS. After freaking out I logged onto this site to learn more. I’ll be here quite often I’m sure. After a long series of tests and more tests they have him on Betaseron injections every other day. This will be a long process and I’m so glad I found this to read other peoples stories and encouragement.