When John Gillis got esophageal cancer, he trusted Mayo Clinic

John Gillis went to "the best place possible" when he got esophageal cancer and got a result that he never imagined.

The persistent stomach pain caught John Gillis by surprise. The active 53-year-old had rarely been sick a day in his life. He sought care from a doctor in his hometown of Fishers, Ind., who treated him for gastric reflux. But medications didn't stop the pain. 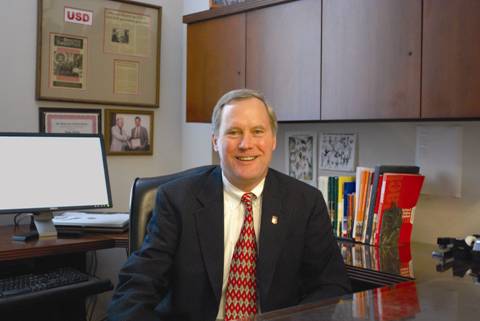 A week later, John was examined by a specialist in Indianapolis, who told John that he had esophageal cancer and recommended surgery to remove it.

"It wasn't until I emailed my three brothers and my sister to tell them the news that it really started to soak in that I had cancer," recalls John. "The idea of having my chest cracked open to do surgery to remove the cancer got me thinking about my options. I went on the Internet and Mayo Clinic was cited among the very top places in the country for treatment. I made an appointment and all the tests were scheduled for me right away."

The tumor measured about 3 inches (7 centimeters) and was located high in the esophagus, pressing on John's trachea. "It was odd because I had no sensation of anything in my esophagus until I was given the diagnosis," says John. "It was as though I suddenly became mentally aware of it."

Dr. Francis recommended a treatment plan of six weeks of chemotherapy followed by radiation therapy to shrink the tumor, then six weeks of rest followed by surgery to remove the remainder of the tumor. Surgery would be performed by Dennis Wigle, M.D., Ph.D.,a Mayo Clinic thoracic surgeon.

The radiation and chemotherapy treatment was carried out by health care providers in Overland Park, Kan., where John stayed with another brother, Floyd. "I experienced fatigue, lost my appetite and weight during chemo, but I really didn't get real sick," says John.

Even during treatment, John, who works for the National Federation of State High School Associations, continued to oversee a major project, the National High School Spirit of Sport Award. "I worked as much as I could, but I thought I had a snowball's chance of ever attending the summer awards ceremony or getting back to work," he says.

With treatment concluding in Kansas, Dr. Wigle asked John to prepare for surgery by gaining weight. Following a regimen of regular weight lifting, eating and walking, he gained 24 pounds. "I felt in as good of shape as I had ever been in my life and was ready for surgery."

Accompanied by his brother Rick, John was seated in the same office where he heard the original diagnosis when Dr. Francis delivered another bombshell. "She told us the tumor was gone … completely! When my brother asked how often this happens, she said, 'Almost never.' It was a possibility I had not allowed myself to consider. I cried." Dr. Wigle reiterated that this occurs less than 5 percent of the time.

That evening, John joined friends and family members for a celebration dinner. "It was the best dinner of my life," he says.

Back at work, John continues administering the Spirit of Sport Award, which has taken on greater significance since his experience with esophageal cancer. "This experience has helped me empathize with award recipients, who have overcome similar challenging circumstances or adversity to reach their goals. I truly believe administering this program is part of God's plan for me."

John attributes his outcome to his faith, great support from his siblings, co-workers and friends, and Mayo Clinic. "I went to the best place possible for my care," says John, who returns to Mayo Clinic quarterly for follow-up. "Mayo has become a huge part of my life. Mayo employs highly professional, caring staff members who address your every need from physical to emotional to spiritual. I owe my life to the Mayo Clinic."