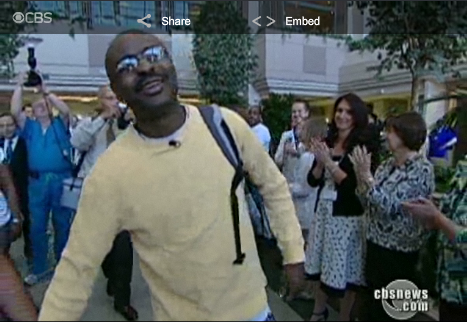 A Mayo Clinic patient achieved a medical milestone recently when he was the first U.S. patient to go home with a new kind of portable artificial heart. CBS Evening News covered the story, which began as follows:

For nearly two years, 43-year-old Charles Okeke has tried to live a normal life in the hospital tethered to a 400-lb. machine.

"It sort of overwhelms you to think, 'I'm stuck to a machine,'" he says.

Okeke was barely 30 when a blood clot destroyed his heart, reports CBS News medical correspondent Dr. Jennifer Ashton. He had a transplant and for 10 years life was good for this computer consultant and father of three.

But in 2008 his body rejected that heart and at that time another transplant was out of the question.

Okeke now has what is called a "total artificial heart." Both ventricles were removed along with four valves. Connector tubes were sewn in. It pumps blood just like a human heart.

Mr. Okeke is a patient at Mayo Clinic in Arizona. His surgeon, Dr. Francisco Arabia, was instrumental in enabling him to get approval to use the new device.

Watch the story here on the CBS site.