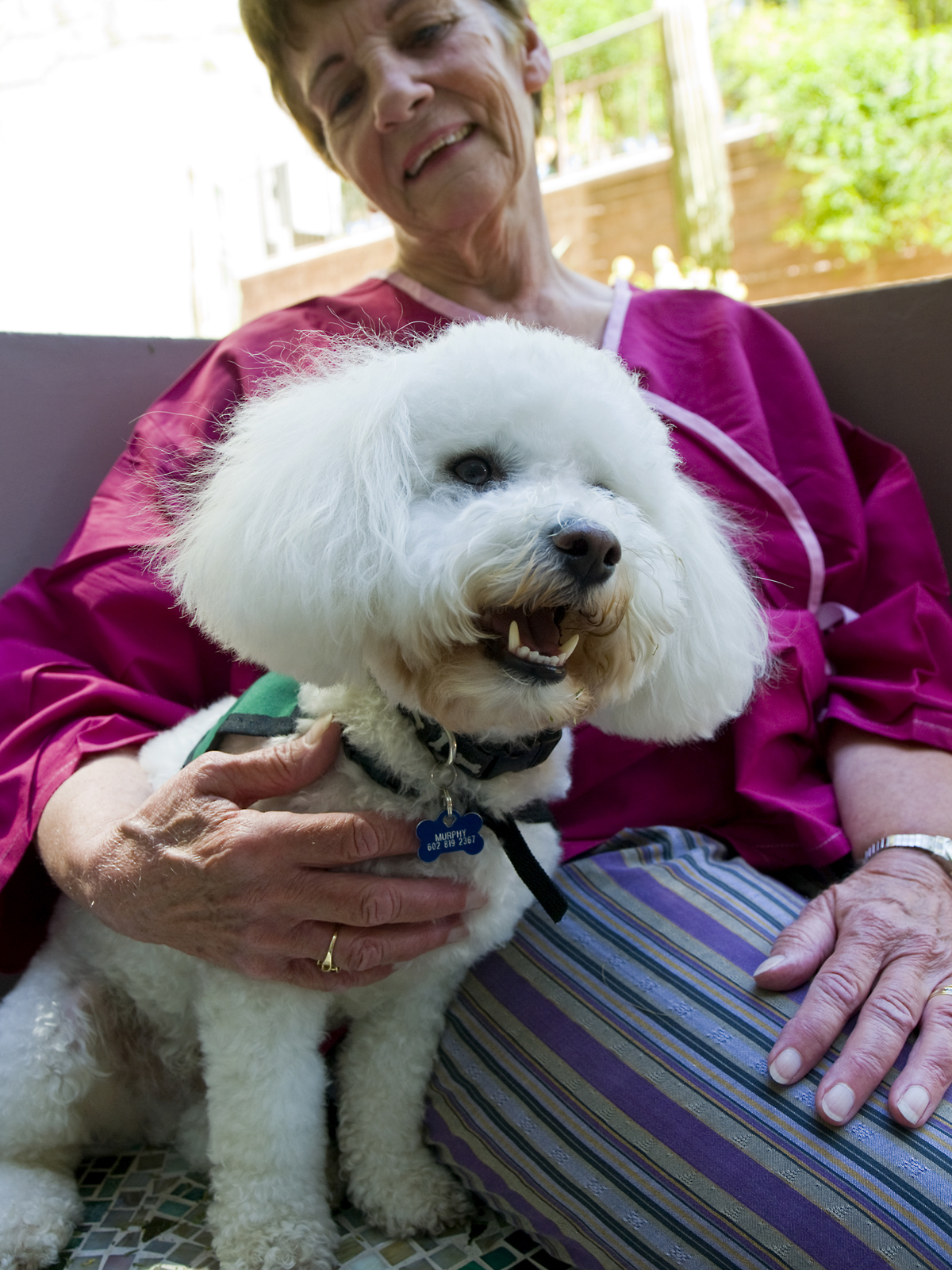 Let’s face it, it’s never fun going to the doctor.

But for some patients coming in to receive radiation at Mayo Clinic’s Phoenix campus, sitting in the waiting room just got a little more relaxing, thanks to a furry, four-legged Mayo Clinic ambassador named Murphy.

“I think Murphy helps people forget they have cancer.  He is such a sweet, loving and gentle dog and people feel that immediately from him,” says Phil Whitton, manager of Radiation Oncology at Mayo Clinic in Arizona.

Murphy is part of a pilot program called Pets are Loving Support (PALS) that’s being tested at Mayo’s Phoenix campus.  Since February, this white Bichon-Poodle and his handler, Mayo employee Kellye Wagner, have been delighting patients as they make their rounds in the waiting area of the Mayo Clinic Specialty Building (MCSB).

“I will let him take the lead and he will make his rounds and greet,” said Wagner, of Murphy who appears to enjoy snuggling up to patients and entertaining them with an array of tricks including hi-fives.

Wagner, a quality improvement specialist, said she always knew there was something special about her loveable, mellow dog. “He has been calm in all environments since he was a pup. I knew I wanted to do something with him,” said Wagner, who took the advice of Murphy’s obedience trainer that he’d be a great therapy dog.

After the cute canine completed a year of obedience training, Wagner, along with Murphy’s trainer, began six months of animal assisted activities and therapy training with two-year-old Murphy.  Murphy and Kellye became certified last fall for animal assisted activities and therapy through the Delta Society, a non-profit organization that trains, screens and certifies volunteers and their pets so they can visit patients in a number of facilities including hospitals, hospice, therapy centers and nursing homes.

"I think pet therapy is so important for our patients.  Murphy seems to take away some of their stress by giving patients a nice distraction while they wait for their appointment. He really brings a smile to people's faces," said Whitton, who helped Wagner get the PALs program started at Mayo earlier this year. Wagner said her managers were also receptive to the idea of her volunteering some time (on her lunch hour) taking Murphy to see patients a few times a week.

Murphy seems to have an innate sense of which patients seem to need his attention most, said Wagner, recalling a time when a patient got teary-eyed when Murphy laid beside him on the loveseat he was sitting on and nudged his head under the patient’s hand.

“The patient said he was having such a hard day and was so touched by Murphy that it made his day,” said Wagner.

She also remembers another patient encounter where a man, who suffered a stroke and was now battling cancer, broke into a smile when he saw Murphy. The patient pet Murphy and spent some time with him before his appointment.  “It really touched his (the patient’s) wife that he was so happy,” said Wagner.

Wagner said she’s seen patients and their family members react to Murphy in different ways. “Some want to play with him, pet him, snuggle or hold him. Some even want to take their picture with him,” said Wagner, adding her dog often evokes positive memories for patients who like to talk about their own pets or pets they had growing up.

And it’s not  just patients who enjoy seeing Murphy.

"In radiation oncology, Murphy is known as their mascot,” said Wagner.  “They will ask when he is coming in next so they can have some ‘Murphy time’ as well.”

“It’s as if he knows he has a job to do today,” said Whitton, “And that job is to brighten someone’s day.”

This story was written by Julie Janovsky-Mason, a communications consultant at Mayo Clinic in Arizona.