A first of its kind surgery 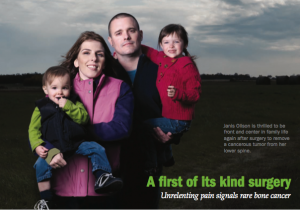 Three years ago, when Janis Ollson, now 32, was pregnant with her second child, she experienced agonizing back pain. But, unlike the back pain she had during her first pregnancy with daughter Braxtyn, this time the pain would not subside.

Ollson, who lives in Balmoral, Manitoba, Canada, eventually went to the hospital and refused to leave until she was admitted. “I knew something was wrong,” she says. “That degree of pain could not possibly be normal, even during pregnancy.”

Listening to her instincts and refusing to take no for an answer helped save Ollson’s life — along with a groundbreaking surgery at Mayo Clinic.

Initially, Ollson’s physicians in Canada diagnosed her with sciatica, pain that radiates along the path of the sciatic nerve, from the back down the buttock and leg. Concerned about other causes, a neurologist ordered a magnetic resonance imaging (MRI) scan. It revealed a tumor the size of her hand on her lower spine.

Physicians suspected the tumor was cancerous. Confirmation had to wait until after the birth of baby Leiland, when biopsies could be safely performed.

Those tests showed that Ollson had chondrosarcoma, a primary bone cancer. Chondrosarcoma can go undiagnosed for months or years because pain may be the only symptom. It often occurs in the pelvis, hip or shoulder. It does not respond to chemotherapy or radiation. Ollson’s physicians in Canada had doubts about the diagnosis, because chondrosarcoma is rare in a younger person. They sent tumor tissue to Mayo Clinic in Rochester for confirmation.

Mayo Clinic confirmed the cancer, which had spread through several bones, her pelvis, sacrum and lower spine and into muscle tissue. Ollson’s only chance of survival was surgery.

Ollson says the Canadian specialists believed they could remove the cancer but were less sure about reconstruction. Getting the cancer would require removing the lower spine, half of Ollson’s pelvis and her left leg. That procedure separated her healthy right leg and pelvis from her spine.

“When I heard this news, I was in complete shock,” says Ollson.

Canadian physicians had contacted Michael Yaszemski, M.D., Ph.D., an orthopedic surgeon at Mayo Clinic in Rochester, Minn. He believed the reconstruction could be successfully done. “Reconstructing Janis’ body would require restoring continuity of her torso to her remaining pelvis, using bone from the left leg that was to be removed,” says Dr. Yaszemski. “Successful, challenging surgeries are the product of teamwork — a hallmark of the collaborative environment at Mayo Clinic.”

Ollson and her husband, Daryl, trusted Dr. Yaszemski’s team, which included eight surgeons, to save her life. “To me, it was black and white, live or die,” says Ollson. “Without the surgery, I would die. With the surgery, I could live. I did not have another option, and they knew what they were doing.”

Working with cadavers in the anatomy lab, Dr. Yaszemski and Mayo Clinic experts in biomechanics designed a unique method for reconstructing Ollson’s pelvis. “We felt confident that it offered Janis the best opportunity for optimal function in her activities of daily living,” says Dr. Yaszemski.

In a 13-hour procedure, surgeons removed Ollson’s left leg, half of her pelvis, her tailbone and part of her lower spine. One week later, in a seven-hour operation, they took a portion of the left leg they had removed, and rotated it and secured it to the pelvis. Then, they shifted the right leg and remaining part of the pelvis and secured it to the spine. This helped to ensure that the right leg would remain functional and that the left side could accommodate a prosthetic pelvis and leg.

Ollson was kept sedated (unconscious) during the week between the two surgeries. In that time, she and her husband had their seventh wedding anniversary.

“After the second surgery, when I felt pain during my recovery, I regarded it as part of getting better and hurdles I needed to overcome,” says Ollson. “I didn’t complain; I continued to look forward to each new step.”

Ollson spent 52 days at Mayo Clinic and continues her rehabilitation. “My recovery has been long and slow, but I’ve made continual progress with no setbacks,” she says. Ollson uses a wheelchair or crutches. She drives a car, snowmobile and all-terrain vehicle. She swims with her children.

“I won’t let anything slow me down, and I don’t like to be left out,” she says. She was determined to walk again before Leiland began walking — a goal she accomplished.

“My life’s dream was to be the best wife and mother I could be,” says Ollson. “I want to do things with my children, not just watch them.” By all accounts, Ollson has fulfilled her dream.

“I’m really happy for her,” says Dr. Yaszemski. “She and her family have been super through this. They haven’t lost their enthusiasm for life. Janis has said — and I believe her — that she isn’t going to let this change the way she interacts with her family and raises her children.”

“I’m back to being a wife and mom now,” she says. “I think the kids seeing my journey will make them better and stronger. There’s nothing you can’t get through with supportive people around you. I will always be grateful to my amazing team at Mayo Clinic for the gift of my being here while my kids grow up.” 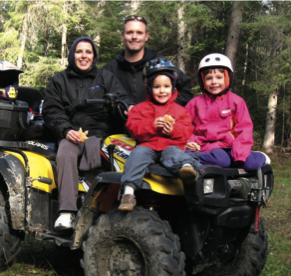