New Heart instead of a Honeymoon 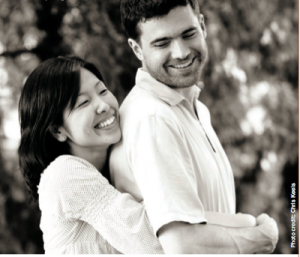 Instead of honeymooning in Ireland, Adam Janusz and his wife, Saori, took a journey of the heart.

The couple’s odyssey started when they’d been married for less than two years and were preparing for a delayed honeymoon. Then Janusz got sick with what he thought was a cold. His lungs felt congested. An X-ray indicated pneumonia. He didn’t feel any better a week later, and he began to notice his pulse “wasn’t right.” He had difficulty eating and sleeping.

In March 2009, Janusz went to an emergency room in Phoenix, where he experienced cardiac arrest. The physicians determined he was in heart failure. They contacted a team from Mayo Clinic in Arizona, led by Francisco Arabia, M.D., a cardiothoracic and transplant surgeon, and transferred Janusz to Mayo Clinic for specialized care.

At Mayo Clinic, Janusz was diagnosed with giant cell myocarditis, a rare, devastating disease that usually affects young, otherwise healthy individuals. Symptoms include chest pain, shortness of breath and fatigue. Heart failure, heart attack or sudden death can occur. The cause of the disease is unknown.

At Mayo Clinic, Janusz received two VADs — one for each side of his heart. In July 2009, he was strong enough to go home. He was outfitted with portable VADs to replace the large units he used in the hospital.

“When you have VADs, you have to have a lot of trust — that the devices will keep you alive, that you understand how the technology works and what you need to do to keep them functioning,” he says.

“I had confidence in everyone who cared for me at Mayo, so I trusted that everything would go well.”

The damage to Janusz’s heart was severe, and it became clear that he would need a heart transplant. He received a heart in October 2009.

“Since the transplant, I tire more easily, but I feel pretty great, considering what I’ve been through,” he says.

Janusz and his wife now live in Los Angeles, and they recently returned to Arizona for his one- year post-transplant checkup. They climbed Camelback Mountain (elevation 2,706 ft.) in Phoenix. “I was slower than I used to be, but I made it to the top of the mountain,” says Janusz.

Janusz says he is still astonished by the VADs and heart transplant. “What an unusual and amazing thing to imagine and be part of,” he says. “I am honored to have benefited from the extraordinary expertise of the Mayo doctors.”

Janusz and his wife still haven’t had their honeymoon. “We had a crash course in marriage,” says Janusz. “This experience has made me enjoy observing life and its intricacies and not let it sweep by quickly.

“We’ll get our honeymoon. For now, I feel lucky just to be here.”