The below article comes from our Sharing Mayo Clinic print publication: 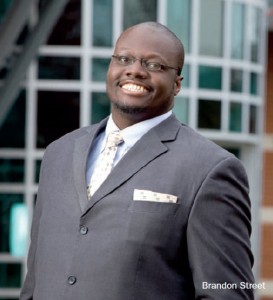 At 6 feet 4 inches tall and more than 200 pounds, Brandon Street could easily be described as “big.” In high school, his nickname was “The Big Street.”

When this active young man who enjoyed playing sports began to have irregular and difficult bowel movements and occasional blood in his stool, he didn’t worry too much. He thought his diet was to blame.

“I tried to hide it in high school. I didn’t want people to know there was a problem,” says Street, a native of Douglas, Ga.

But at 19, during his second semester at South Georgia College, Street started losing weight rapidly. He went from a healthy and vibrant 235 pounds down to 183 in a few weeks. “I knew something was wrong, and I couldn’t hide it anymore,” says Street, who spent six days in a local hospital. His diagnosis was Crohn’s disease.

The challenge for many patients with Crohn’s — including Street — is that significant flare-ups alternate with periods of no symptoms. Over time, the inflammation caused by Crohn’s disease can spread deep into layers of intestinal or bowel tissue and cause painful and debilitating — sometimes even life-threatening — complications.

The drastic weight loss and recurring episodes forced Street to take a year off from college. The bowel problems led to malnourishment and such weakness that sometimes his father had to push him around in a wheelchair. “That was the worst — to go from being ‘The Big Street’ to not being able to walk,” says Street.

At his mother’s urging, Street came to Mayo Clinic, which is nationally recognized for treating gastrointestinal diseases and researching new therapies.

“If anyone could help me, they could,” says Street, who met with Dr. Cangemi, along with specialists in colorectal surgery, radiology, pathology and nutrition.

“Crohn’s patients require a comprehensive approach to care,” says Dr. Cangemi, “especially since they can be at risk for other health issues, including inflammation in the joints, eyes or skin; anemia; osteoporosis; and gallbladder or liver disease. Our goal, through the right mix of medicine and occasional surgery, is to create a better quality of life for our patients.”

Street began a regimen of medication that, over time, relieved the symptoms and helped him regain his strength.

Because doctors don’t fully understand the disease, Dr. Cangemi says, it’s hard to predict what triggers flare-ups. About half the patients who have lived with the disease for at least 10 years require surgery, Dr. Cangemi says. But Street isn’t worried. “I am doing well — perhaps too well,” he says with a laugh, noting that the scale now reads 286 pounds.

Today, Street is back in school, this time working as the freshman hall director at Abraham Baldwin Agricultural College in Tifton, Ga., and he is thankful to Mayo Clinic for giving him the opportunity. “I thought I would be living on disability,” Street says. “Now I have a retirement plan. “I tell everyone, ‘Don’t go anywhere else. Mayo Clinic has the right team there for you.’”