A Marathon of Another Kind: Kidney Dialysis for 13 Months 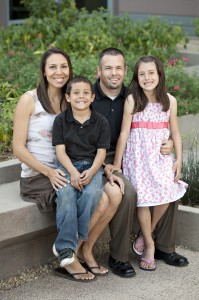 It was the summer of 2008, and Nichole Rushton was primed and ready to run 26.2 miles – a marathon – something she had accomplished with relative ease twice before. At age 28, she well could have invented the concept of “multitasking,” keeping physically active, raising two kids and being a devoted wife to her husband, Isaac.

But, felled by an uncharacteristic sore throat, she had to sit out the marathon. Strep throat was the initial diagnosis, and then “mono” – until she deteriorated to the point where her kidneys went into stress mode. Diagnosis: Acute kidney failure. Further tests revealed vasculitis, an inflammation of the red blood cells. Then Nichole experienced a severe life-altering seizure, witnessed by a frightened, yet composed Isaac, which landed Nichole at Mayo Clinic Hospital in Arizona.

“I went from the treadmill to a hospital bed,” Nichole laments.

It was at Mayo Clinic that she heard words that rocked her world. Nichole would have to be on kidney dialysis for the rest of her life – unless she qualified to have a kidney transplant.

By early December 2008, her seizures had returned, rendering her ineligible to drive. She and Isaac moved in with Isaac’s parents so that their daughter, Mia, then 6, could be driven to school, and their son, Max, then 4, could be closely watched while Isaac was at work -- in the event Nichole had another seizure.

“I felt like a child,” confesses Nichole. “I needed constant supervision. I realized that not only had my life changed, but so had everyone else’s around me.”

Depression takes over, as does blood clot

Her “marathon” took on new meaning as she faced what would be 13 months of marathon kidney dialysis appointments. To further plunge Nichole into depression, doctors discovered a blood clot in her heart, a condition requiring blood thinning medications and removal of the stent that was in her chest to allow for dialysis. Instead, a stent was placed into her groin area to allow tubing for her three-times-per-week dialysis. This deprived Nichole of one of her greatest pleasures – a relaxing bath in a tub, something she would not experience again for nearly eight months.

Nichole admits she fell into a deeper depression, sitting at dialysis, being one of the youngest people there, and being all too aware that a number of the other patients were “lifers,” with no chance of a kidney transplant because of age or other medical conditions. She couldn’t help but think about her last marathon, where even when she “hit the wall,” as is often the case by at least mile 20, she sprinted across the finish line.

Now she and Isaac had to grasp terminology they had never thought about before. Stents. Fistulas. Creatinine levels. And the difference between a 17 and a 15-gauge needle.

Fellow patients in dialysis agreed that their common plight was a little like “being a prisoner in your own body.” In fact, even the language sounded like familiar “prison” talk, such as, “What are you in for?” when asking each other what disease caused their kidneys to fail.

Journaling: A way to cope

On Nov. 15, still riddled with fear, pain and depression, Nichole entered her first thoughts into a journal that had been given to her by close friend, Heather. Heather told Nichole that perhaps it wasn’t her place to suggest journaling, given that she could not possibly know what Nichole was experiencing. But the journal was a hit. In fact, journaling by both Nichole and Isaac led to what is called “The Dialysis Diary,” which is now a book Nichole hopes will help others on the same journey.

One of the most poignant entries in “The Dialysis Diary” was not written by Nichole, but by her loving husband, Isaac. He wrote, “My love, my happiness, my best friend, my soul mate…Life has thrown us quite a curve ball…But now you’re ready for the next pitch. I have no doubt you will knock it out of the park. So swing away…”

Recalls Nichole, “Tears of joy rolled down my face when I read that.”

Isaac was never 100 percent convinced that it all would turn out. Nor did he know that one day he would be part of a compelling and creative way to donate a kidney to a patient in need. And that the patient would not be Nichole, his soul mate, but a total stranger.

Asking ‘Santa’ for a new kidney

When Christmas of 2008 came around, Nichole joked that yes, she would ask “Santa” for a new kidney – or, really, a “previously-owned, yet certified,” kidney. The question remained: Where would that kidney come from? She had been told that her wait for a deceased donor kidney could range from six months to six years.

For Nichole, it was hard to wrap her head around the fact someone would have to lose his or her life in order to help another – and that a family would be grieving for their loved one. Unless she found a living donor of a kidney, that is.

It was a no-brainer for Nichole’s family and friends. At least a dozen of Nichole and Isaac’s friends and family members offered up a kidney, all noting that “they have an extra.” Of course, Isaac was the first to step up to be tested to be his wife’s donor, since they shared the same blood type. But not so fast. Beyond blood type, there are other considerations, importantly, antibodies. The phone call they had been waiting for when Isaac was tested came, and the answer was not what they wanted to hear. Because of antibody issues, he was not a match for Nichole. Isaac broke down. He found it so hard to tell his wife. Nichole looked on the bright side – without her husband going through a surgery as well, he could be in good shape to take care of her!

A number of well-intentioned potential donors were tested. One by one, from relatives to close friends, they were rejected for various medical reasons. Six months came and went while Nichole endured dialysis. When “Cinco de Mayo” came, she entertained the idea of having a margarita. She resisted.

Hope in the form of the Kidney Exchange Program

Then Mayo Clinic cautiously began telling Nichole and Isaac about the “kidney exchange program.” It’s a creative way to expand the pool of available kidney donors so that people like Nichole could receive a kidney, and people like Isaac, who was not able to be her donor, could donate to someone else in need. Everyone “swaps,” so to speak, and compatible kidneys are found from patients in a situation just like Nichole’s.

On Oct. 13, 2009, Nichole and Isaac got the news that it appeared they were a match for another couple in the same situation.

After so many disappointments, Nichole and Isaac were wary about getting their hopes up. But this time, disappointment turned to excitement. After all, Nichole had endured needle sticks and dialysis for a year. She was ready. And the word came from Mayo that all the approvals had been settled, and the exchange surgeries would take place on Nov. 17, 2009. Isaac’s kidney would be sent to Utah, for someone who was a match. And a stranger’s kidney from Utah would come for Nichole – also a match.

In such exchanges, names of the patients are not revealed. Nicole and Isaac only knew that the exchange would be with a couple in Utah. Their hope is that some day they might meet the other couple. (Such meetings are arranged by organ procurement agencies only when both sides agree.)

Nichole’s last day at dialysis was bittersweet. She had met so many friends, so many techs and nurses and people who encouraged her to move ahead with a transplant. (Even people who would never be able to leave dialysis – who were in it for the long haul. But they celebrated with Nichole.) A tech Nichole greatly admired also came in on his day off to say goodbye and good luck. Tears were abundant by all.

Surgery day, Nov. 17, went like clockwork. Nichole was able to kiss Isaac goodbye before his surgery, and the two connected post-surgery to take measured steps around the nurses’ station to do their first walk.

Their families celebrated. Along the way had come another unexpected challenge. Nichole’s father had almost died himself of liver failure. Nichole had prepared to say her goodbyes. But a miracle took place, and her dad was able to get a successful liver transplant at Mayo Clinic.

Nicole’s last entry in her “Dialysis Diary” reads, “I now know the true meaning of ‘blessing.’ Here’s to the next chapter in my life.”