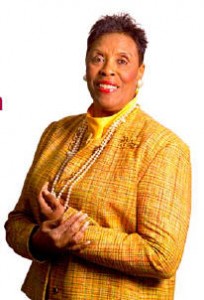 Jessie Barksdale remembers 1986 well. It was when she was told she had cancer. She recalls asking her doctor: “Do you think I’m going to make it?”

Diagnosed with multiple myeloma, the second most frequent type of blood cancer, Barksdale had a right to be concerned. Based on statistics, she didn’t have great prospects. Multiple myeloma affects about five in 100,000 people and is often not diagnosed until the disease has progressed. Most patients are told they have a short time to live.

Multiple myeloma is a cancer of the plasma cells, a type of white blood cells in the bone marrow — the soft, blood-producing tissue in the center of most bones. The exact cause of the disease is unknown, but doctors know that multiple myeloma begins in the bone marrow with one abnormal cell that multiplies. While the condition, which most often affects older patients, can be managed, there is no cure.

The disease can cause bones to thin, leading to fractures and pain. It can also cause low red blood cell count and fatigue. As the myeloma cells crowd out normal cells in the bone marrow, the production of normal blood cells is affected. This process can cause anemia, prevent normal blood clotting and interfere with the body’s immune system, leading to infection or kidney failure.

Because Barksdale’s illness was caught early, she was able to forgo traditional therapy for a time. But in 1998 she relocated to Palm Coast, Fla., and sought an oncologist for continued monitoring. A family member referred her to Mayo Clinic.

“I’m from Harlem,” says Barksdale, now 73. “I had never heard of Mayo Clinic. But my niece said it’s the best place in the world to go for your disease. So I made an appointment.” Larry Solberg, M.D., a hematologist/oncologist, became her “guardian angel,” she says. “He told me I had taken wonderful care of myself, but progress was being made with treatments and it was time for additional therapy now.”

She began a chemotherapy regime, which is common for most multiple myeloma patients, but over time, the disease continued to escalate. With two grown children and grandchildren, Barksdale wasn’t sure what more to do. “I got to the point where I thought what’s to be will be, and I just asked God to give me strength.”

Dr. Solberg and his colleagues at Mayo Clinic were working hard to find new alternatives for patients with multiple myeloma.

“There has been a lot of work into understanding a person’s unique myeloma and tailoring a treatment plan to his or her particular situation,” says Vivek Roy, M.D., a colleague of Dr. Solberg and medical director of the Blood and Marrow Transplantation Program at Mayo Clinic’s campus in Jacksonville. “Research is leading to earlier diagnosis and more effective treatments and therapy combinations to extend the lives of patients with multiple myeloma.” Doctors suggested Barksdale undergo a bone marrow transplant. The goal was to repopulate the bone marrow that had been compromised due to the toxic effects of the chemotherapy and the multiple myeloma itself.

On February 13, 2001, Barksdale underwent what she described as a relatively painless procedure Due to her condition, Barksdale was able to undergo an autologous donation where her own cells were used to replenish her body’s supply of healthy blood-forming cells. She’s been in remission ever since. “When I realize how long I’ve been in remission and I look back at all I’ve gone through, I’m so thankful,” Barksdale says. “A lot of people get this diagnosis and think it’s the worst scenario, but look how far I’ve come. It’s been more than 20 years and I’m still here.”

Despite her disease, Barksdale has been able to enjoy life, especially daily walks and evenings out with her husband. She’s thankful for the advances in care. “I’m a testament of how far we’ve come.”

Says Dr. Roy: “We still have work to do to find best treatment for multiple myeloma, but stories like Ms. Barksdale’s give us hope, encouragement and inspiration for the future.”