Melanoma can Happen to Anyone 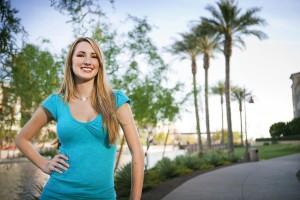 When I was 17, I was diagnosed with stage one skin cancer. My primary care doctor, Dr. Sonia Lenzmeier has been checking my skin since I was 15 years old.  On one of my office visits, she noticed two odd shaped moles in the middle of my upper back. She recommended taking biopsies from the suspected areas. I didn’t think anything of it. I made an appointment for the next week to have the sites removed. When the sites were sent for testing, the results were returned within a week stating that one mole was positive for stage one melanoma.

I was devastated. I had no idea that it was possible to get skin cancer at my age. My parents were very strict with my sun exposure. I would wear sun block, sunglasses, and protective clothing anytime I went outside. Due to their diligence of taking care of my skin, I had only burned about 4 times.

After the diagnosis, it was suggested that I see a general surgeon and dermatologist. So, I made appointments with both Dr. Susan Laman and Dr. Barbara Pockaj.  First I visited with Dr. Laman, the dermatologist. In our appointment, she performed a skin check and took photos of my body so I would be able to check my own skin at home. During the appointment, Dr. Laman performed skin shavings on any questionable moles.

Since I was only 17 at the time of the surgery, I had to have it at Phoenix Children’s Hospital. Dr. Pockaj went out of her way to make sure that she was able to perform the surgery for me there. I felt very assured by her and the team that she was working with. My parents and I felt reassured because of the level of professionalism that the doctors had. I knew I was in the best hands with my team of doctors, and that is what got me through it.  I knew they would fix me up.

When the surgery was finished, I had follow up appointments with Dr. Pockaj and Dr. Laman.  I was very pleased with how they said I was recovering well and was told that I will have about 3 months to fully recover.

After recovering, I started to consider having the scar on my back reduced. I had many conversations with my parents before making an appointment with Dr. Peter Kreymerman, a plastic surgeon. I was having immense pain with my scar, not just from the nerve endings, but also when people would touch it.

During my appointment with Dr. Kreymerman, he explained two different procedures he could perform to reduce the size of my scar. The first was putting balloons in my back and slowly increasing the size of them to stretch the skin. The second procedure was really a series of 2 to 3 surgeries to reduce the scar called serial excisions. Once again, my parents and I sat down and spoke about the options that I had as a college student. I chose to have the serial excisions. The first excision took place in November of 2010.

I have been having an amazing time with all of the doctors that have helped me through from my diagnosis to my last surgery. The team that I have worked with has been great. I am looking forward to continuing to work with them as I have to return every 3 to 6 months for skin checks.

I have taken this diagnosis to heart. I wear my scar proudly and answer any questions that people may have about it. Most reactions that I get are pure awe. I tell my story to anyone who asks. I tell all my friends how important it is to go get skin checks and learn the difference between a mole and a freckle. I find it important to tell my story because most people my age don’t think that it could happen to them. Age is no matter when it comes to Melanoma, it could happen to anyone.