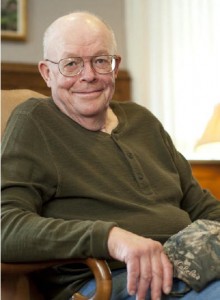 The giant couldn’t crush Ron Woodside’s spirit. The giant — an EF4 tornado that dropped from the sky on June 17, 2010 — destroyed his home and took away the irreplaceable — his wife of 18 years. But Woodside, 77, has survived and thrived.

Ron and Kathy Woodside lived in rural Albert Lea, Minn., and were attuned to the weather that day — which set a new Minnesota record with 48 tornadoes. Woodside recalls seeing an approaching rain cloud and hearing the rain begin. Within moments, the walls of their home were quivering. The home blew apart and the couple was at the mercy of the twister, with wind speeds around 174 mph.

“I remember bouncing along, like a giant was hammering me into the ground,” says Woodside. His wife, Kathy, did not survive.

As a Level One Trauma Center, Saint Marys Hospital was prepared for Woodside with the highest level of emergency care. Board-certified trauma surgeons and specially trained staff are available around the clock.

In all, he had 27 broken bones. All 11 ribs on the left side were broken, most of them in more than one place. His lung was punctured. His right elbow was dislocated. Ankle ligaments were torn. Both shoulder blades and a cheekbone were broken.

Doctors ascertained Woodside’s chest wall trauma was most concerning. On June 22, a surgical team led by Brian Kim, M.D., stabilized many of the broken ribs with titanium plates and screws. The specialized surgery has been offered at Mayo Clinic for about two years.

“Without rib stabilization surgery, it’s difficult for ribs with multiple breaks to fuse back together in proper alignment,” says Dr. Kim. “The result would likely be a collapsed chest, chronic pain and lifelong breathing difficulties.”

The surgery was successful and, step by step, Woodside’s other injuries were addressed. “The team approach to care worked well for Mr. Woodside,” says Michael Torchia, M.D., the orthopedic surgeon who repaired his torn ankle ligaments. “We had the specialists to cover all the bases for his care.”

Woodside’s team also included a supportive family: His children and stepchildren and their spouses, 23 grandchildren and his brother, Jack. “I can’t remember a time when there wasn’t a family member at his side,” says Dr. Torchia.

Five weeks after the tornado, Woodside was discharged to a care center to continue recovery. “I’m amazed I got out of there that fast,” he says, giving some credit to his otherwise good health. “One doctor said I was like Benjamin Button,” he says with a chuckle, a reference to the literary character who progressively gets younger.

Bit by bit, Woodside has pieced his life back together. He’s now home, living in a new house built on the farmstead. He was a regular spectator at his grandson’s high school basketball games. His hunting rifles — found amid the debris — have been restored and are ready for a new hunting season.

Woodside’s resilience and recovery have been remarkable to his care providers. “My overwhelming recollection of Mr. Woodside was his determination to get well and get back to hunting,” says Dr. Torchia.

Avowing no bitterness, Woodside says he’s lucky to have survived. “I’m fortunate that I lived close to Mayo Clinic.” For the luck of proximity, he can look to another devastating tornado. On August 21, 1883, a tornado struck Rochester, killing 37 people and injuring 200. That storm was the impetus for building Saint Marys Hospital and Mayo Clinic.

“My story is unusual,” says Woodside. “I’m grateful. Normally a person wouldn’t live after being out in a tornado.”

Watch a video interview with him here: