When the Mayo Pharmacy opened on the Florida campus in November 1986, its lone pharmacist, Nan Sawyer, filled just 11 prescriptions that day. Little did she know, 25 years later, the pharmacy would fill its one-millionth prescription. 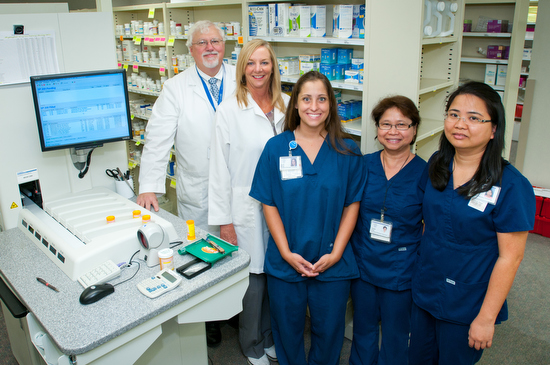 “Reaching that number is a remarkable milestone,” says Sawyer, “But what really matters is what got us there – focusing on each patient’s needs.”  Individual patient attention has been the pharmacy’s goal from the start.

“When we first opened, we were all consumed with delivering high value health care to each and every patient, as we knew Mayo Clinic had to establish itself in the south as the premier health care facility,” says Sawyer.

As the pharmacy’s only employee, Sawyer remembers wearing many hats. “I stepped onto the freight elevator carrying a large crate of supplies, and my boss, Carl Rider, happened to be on the elevator. He looked me up and down and asked me if that was what I was hired to do. I quickly replied ‘yes,’ as I didn’t want the physicians to leave patients to pick up supplies. He asked what I needed and I replied, ‘a pharmacy technician.’ He said, ‘you’ve got it,’ and one was hired. That was the beginning of our outstanding pharmacy team.”

The pharmacy has come a long way since it began in October 1986. There are now four pharmacists, six technicians and a cashier who fill about 1,500 prescriptions a week. Today’s director of Pharmacy, Deborah Crumb, says that individual attention to each patient is still what sets Mayo Pharmacy apart from others.

“We provide a patient consult each and every time we dispense a prescription,” says Crumb. “It’s not optional. Patients need to understand how and when to take their medication for it to be successful.”

Many prescriptions dispensed by the Mayo Pharmacy are “compounded,” meaning they are custom made for that patient’s condition. “The collaborative environment here at Mayo facilitates our ability to custom make medications specifically for a patient’s condition. We are in constant contact with patients’ physicians to be sure the medication will be effective.”

Mayo Pharmacy takes patient care and attention a step further with its medication therapy management program, a one-on-one conference with a Mayo pharmacist to go over all of their medications, possible contraindications, and how best to take their different medications. Transplant patients, who take multiple medications to prevent rejection, are among those who take advantage of the program.

“This goes further than a patient consult,” says Crumb. “Some of our patients take up to 30 different prescriptions; it’s very important they understand how best to take their medications so there are no adverse affects. Sometimes, we are able to eliminate a drug or find a less expensive alternative.” Patients who use an inhaler or a blood glucose monitor often seek a medication therapy management appointment so they are able to use their device on their own.

When the new Mayo hospital opened on the Mayo campus, the Mayo Pharmacy at Mayo merged with the St. Luke’s pharmacy. Volume has increased considerably with the addition of the new hospital, but the focus remains the same. “Patients can go to any pharmacy they want to,” says Crumb. “They come to us because we care and we work hard to do the right thing for our patients.”

By the Department of Public Affairs in Florida