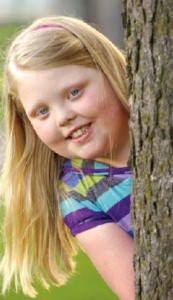 When Mackenzie Chicos, an active 8-year-old from Owatonna, Minn., woke up for school one morning seeing spots in her left eye, her family didn’t suspect that anything could be seriously wrong.

It was — and her vision was at risk.

On that day in September 2010, Mackenzie went to school as usual. She mentioned the spotty vision to her teacher, who sent her to see the school nurse. The nurse performed a vision test, which was normal, and sent Mackenzie home with a note alerting her parents about the eye screening.

At 3:30 that afternoon, Mackenzie was still seeing spots. But 90 minutes later, she could no longer see out of her left eye. Her father, Chad Chicos, took her to urgent care at Mayo Clinic Health System in Owatonna. Providers there sent her to the Emergency Department.

Miguel Mulet, M.D., an ophthalmologist, examined Mackenzie and performed a series of tests, which led to the diagnosis of legal blindness in the left eye due to subretinal bleeding (hemorrhage) caused by an unknown type of tumor. The bleeding had caused the spots and subsequent loss of vision. Mackenzie would need to see a specialist at Mayo Clinic’s Rochester campus — about 50 miles away — for further testing and treatment.

At 8:15 the next morning, Mackenzie’s mother, Gwen Chicos, received a phone call from Mayo Clinic asking how quickly she could bring Mackenzie in to be examined. By 10 a.m., Mackenzie was in Rochester for an exam with retina specialist Jose Pulido, M.D.

“They were on top of everything,” says Gwen about how quickly her daughter saw Dr. Pulido. After a day of tests in Rochester, Mackenzie was diagnosed with a choroidal osteoma, a rare, benign, bonelike tumor in the choroidal blood vessel layer beneath the retina. It’s most common in young women. There is no direct treatment for choroidal osteomas, only treatment for the hemorrhage.

Mayo Clinic doctors used laser photocoagulation, which focuses a laser on the affected blood vessels to stop the bleeding. In addition, Mackenzie had three injections of bevacizumab (Avastin) into her eye over two months to close off the blood vessels.

A follow-up appointment in December showed the bleeding had stopped. “That was our Christmas present,” says Gwen.

By February 2011, Mackenzie’s vision in her left eye had improved markedly. Since then, Mackenzie has continued to retain good vision. Dr. Pulido says that a combination of factors worked to restore the child’s vision: Mackenzie’s persistence in reporting her symptoms, her parents quickly seeking medical care, the timely referral by Dr. Mulet and effective treatment at Mayo Clinic.

The family is very thankful for the care her daughter received. “We were told that Mackenzie is the first child they had seen with a choroidal osteoma whose vision has come back so well,” says Gwen. “For Dr. Pulido’s office to call me 15 minutes after they opened and then be able to work her in right away that morning was so wonderful.”

Mackenzie will continue with regular checkups to monitor for changes in the tumor. As for Mackenzie, “she’s a normal kid again,” says Gwen.