Mayo Clinic began because of a military connection and our commitment to servicemen and women has never faltered. As we celebrate Veteran’s Day this year, we salute the many Mayo Clinic staff members and patients who are veterans, helping to protect our freedoms. It is in their honor that we share this story about a Florida man’s long journey to healing. 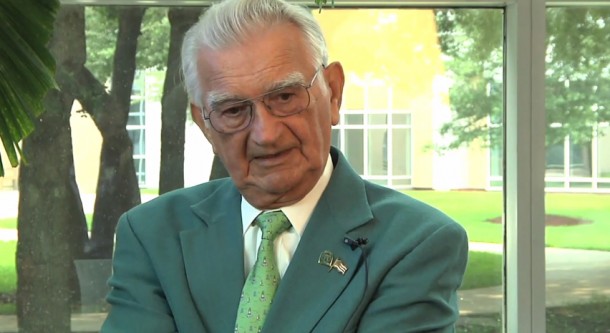 Eventually, something’s gonna kill you.  It’s just life. What we usually don’t know is if what that something will be.  A car accident? Cancer? It could be a falling coconut.  Some suffer.  Others go quickly.  Some see their end coming.  Many don’t.

As we think about the meaning of Veteran’s Day, we salute our heroes who fought wars at home and abroad –  who most likely  thought about their mortality and wondering if they will make it to their next birthday. Dodging bullets is a way of life, literally for these men and women.

“It was always in the back of your mind,” recalls Jacksonville, Fla., resident and Mayo Clinic volunteer Stanley Rozycki, a WWII Polish Army veteran. Rozycki, who was born in 1927, spent three years in the Underground Army as well as four years in the Polish Army under British command. But he also had the misfortune of being a prisoner of war and spent nine months in three different German POW camps. He often wondered if he’d make it to 84.

Rozycki recalls a particular day in 1944 when he was being transported from one German POW camp to another. The train car he was riding in took fire.  Hundreds of rounds ripped through the sides of the train killing many. But not Stanley Rozycki.  Having maintained a seated position during the majority of the ride and exhausted, he made the fateful and fortunate decision to lay down only moments before he saw a sizeable round tear through the car, whizz past the spot where his once-upright torso had just been and strike the body of the man right next to him.

“If I hadn’t decided to lie down at that exact moment, I wouldn’t be here today, “ he recalls.  “It was a miracle.”

Rozycki says he’s witnessed more than a few miracles in his life. That day he walked away from the train. But many, including the man next to him, didn’t. Rozycki recovered the round from the dead soldier’s body and kept it as evidence of the horror he’d witnessed and a token of his good fortune.  Although he has since lost his memento, the bullet and lingering memory of thousands of casualties were not the only souvenirs Rozycki brought back with him from the war.

On Aug. 24, 1944, Rozycki sustained a machine gun wound to the leg while escaping a part of Warsaw that had been overrun by German soldiers. The injury had never healed properly and continued to torment him and cause him pain long after the battles had ceased.

As any soldier is taught to do, he trudged on. After his service, he was awarded a scholarship to study in the United States and was eventually granted permanent citizenship. He received both an undergraduate degree as well as his PhD.  He became a vice president at a major US corporation.  He raised a family.  He volunteered his time. Then, he fixed his leg – 66 years later.

On Aug. 24, 2010, exactly 66 years to the day after that bullet from a German machine gun pierced his left leg, Rozycki underwent surgery to fix the infected vein that had been causing him issues all these years.  Mayo Clinic vascular surgeon Albert Hakaim, M.D., performed the endovenous ablation on Rozycki’s left leg in January of 2010 – a procedure which quelled the majority of Mr. Rozycki’s lingering leg pain.

Rozycki, forever grateful to Mayo Clinic for the quality care they’ve provided, gives back by volunteering at the hospital once a week.  On Wednesday afternoons, you can find him chatting or cracking jokes with the patients waiting for their own procedures, occasionally assisting those in wheelchairs.

“I wake up every morning and thank God that I’m a pusher and not a pushee,” he says, adding “volunteering is so important.  “Mayo is such a great organization; they’re miracle workers.  I consider what Dr. Hakaim did for my leg to be a miracle.  That’s why it’s important to me to give back.”

Rozycki underwent one last follow up procedure earlier this week, just before Veteran’s day, incidentally. But he is confident he will be back at his post on Wednesday afternoons just outside the Bundy Café shortly thereafter.  After all, a sore leg didn’t slow him for 66 years, why should it now?

On the subject of Veteran’s Day, Rozycki, is rightfully sad. Aside from remembering his past comrades, he says he is disappointed that many do not understand the sacrifices or even the history. “We are not nearly patriotic enough today.  It saddens me to think that so many students in the United States today, don’t even know their own country’s history, and that knowledge of history is what fuels patriotism.” He continues: “The past is so important because without a past, we have no future.”

As he recalls the past – the good, the bad, the painful – Rozycki also continues to look forward.

Garrison Keillor once wrote, “It’s a shallow life, that doesn’t give a person a few scars.”   Rozycki has a few.  He’s a man with a past, a rich past and has the scars to prove it.  He has dodged bullets. But he lives fully and looks forward to his next birthday.