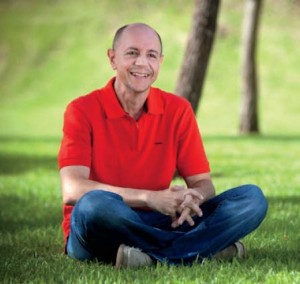 Esophageal cancer took Jorge Rivera, 47, by surprise. An auto loan manager and a father of three, he had a full life and a passion for performing sacred music with his family.

Rivera, of San Juan, Puerto Rico, had “the usual” heartburn symptoms from what he describes as a typical Puerto Rican diet. But a routine endoscopy showed precancerous cells in the esophagus. Cancer cells were found in the sphincter (valve between esophagus and stomach) and in the stomach.

Esophageal cancer is typically treated with an esophagectomy. Surgeons remove a portion of the esophagus and then reconstruct it using part of another organ, usually the stomach or large intestine. Surgery can be performed as an open procedure, with three large incisions, or laparoscopically, where surgical tools are inserted through tiny incisions. The traditional surgery is a high-risk procedure. Long-term side effects can include difficulty swallowing, frequent nausea and heartburn.

Within a month of the initial endoscopy, Rivera was under the care of Mayo Clinic specialists who confirmed his diagnosis. “We assessed the esophagus both through an endoscope and with an ultrasound endoscope, which uses sonar or ultrasound to measure the depth of the cancer,” says Michael Wallace, M.D., a Mayo Clinic gastroenterologist. “Mr. Rivera had an early cancer of the esophagus.”

Rivera was a candidate for endoscopic removal of the cancer, without removal of the remaining esophagus, a procedure called endoscopic mucosal resection (EMR). Surgeons use a high-definition camera to make sure they have removed all of the cancer cells, and then a pathologist confirms results. Rivera’s pathology report showed an aggressive cancer. “Even if we removed all the cancer, those cancer cells are at high risk of spreading to other organs and lymph nodes,” says Dr. Wallace.

In April 2010, surgeons removed Rivera’s esophagus and part of his stomach through small incisions in the abdomen and behind the collarbone. The surgery was done through small laparoscopic devices that allowed the surgeons to remove diseased tissue and reconstruct the esophagus and stomach without opening the chest.

Rivera was released from the hospital in one week and began eating solid foods a month after the surgery. His chemotherapy and radiation plan were administered in Puerto Rico, in close coordination with his Mayo Clinic physicians.

“I persevered in wanting to sing again, and thank God I am fully recovered,” Rivera says. He looked to his father, Jorge Sr., as a model of living life to its fullest no matter what happens. A construction accident decades ago left Jorge Sr. unable to walk. Today, father and son, along with other family members, play weekly at Maria, Madre de mi Señor church in Guaynabo, Puerto Rico. Rivera plays guitar and sings. His father plays Puerto Rican cuatro, a 10-string instrument.

“I thank God for giving me the opportunity to go to Mayo Clinic,” says Rivera. “I received first-rate treatment, which contributed to the new chance at life that I have today.”