Nurse finds out what being “hip” is all about 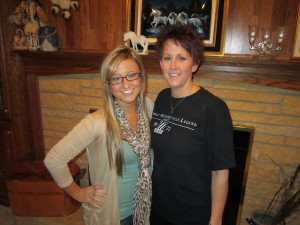 My story begins in 1998. At the age of 32 I was diagnosed with bilateral hip dysplasia. Because I was a breech baby at birth the doctors at home had told me that this was probably the reason why I was having problems. I was having the most pain in my left hip. I first went to see Dr Ray Emerson at the Mason City Clinic in Mason City, Iowa. He took a hip xray and diagnosed me from that. I am an RN and was working at the hospital so being on my feet all day was somewhat of a task at times. He suggested to me that a cortisone shot may help alleviate some of the pain along with an anti-inflammatory. So I took him up on his advice and took the cortisone shot. After about a week the shot wore off and it was back to the pain again. The pain was not yet unbearable at this point and nothing that the anti-inflammatory medication couldn't control. I continued to work as an RN and was on my feet many hours a day.

In 1999 I was referred to Dr Robert Trousdale at the Mayo Clinic in Rochester, Minnesota. He is a hip/knee replacement specialist and also specialized in adult hip dysplasia. He took xrays again and did confirm the diagnosis of bilateral hip dysplasia and explained to me that he could do some sort of surgery to help prolong the use of my own hip. I was reluctant to have any sort of surgery as working in a hospital and being a nurse sometimes knowledge is dangerous!! I was the caretaker not the patient!!! I opted for another cortisone shot and the anti-inflammatory meds. I guess I thought things would get better not worse!! Well things never did get better they only got worse.

Each year seemed to prove that the pain was worse then the year before. I am now age 45 and walking was almost a chore in itself. I was not able to walk my dog anymore because it was to painful. Work became a chore also. I now work as an RN in a very busy oral surgery office so being on my feet from 8-5 was a daily affair. My family kept trying to encourage me to just go back to Rochester and see the dr and have some sort of surgery done. Well at this point I now knew that my only option would be a total hip replacement. I knew that my hip had deteriorated to the point that there was no repairing it now! When I walked I could feel the bone on bone in my left hip. I just kept putting it off for so many years. While mowing the yard this fall I was limping around the yard. My husband came out and could see that I was having difficulty mowing because of my painful hip and took over the mowing for me. My hip hurt so bad at this point that walking was a chore and not something fun to do. It was at this point that I finally decided that enough is enough. At my lunch break that Monday I called Dr Trousdales appointment secretary and finally got myself another consult. The upcoming consult was scheduled for October 20, 2011. That day was only a week off but seemed that it would never get here!!

I went to my consult with my husband and was informed by Dr Trousdale that my options were more anti-inflammatories or hip replacement surgery. I knew at this point that surgery was my only option. Dr Trousdale went over my xray with me and informed me that the head of my femur was full of arthritic nodules and that the cartilage was pretty much gone. There was only a small amount of cartilage left on the back side of the head of the femur (also called the acetabulem). Dr Trousdale was very upbeat and told me that my surgery would only take him about 45 minutes!! Dr Trousdales PA Peter came in to schedule my surgery. He asked me when I wanted to come back for the surgery. I told him that tomorrow was not soon enough. He replied that the doctors schedule was full but that he would check. (I had even brought my things in case the next day was an option!!) To no avail the schedule was full so my next choice was October 31. Halloween!! I thought that I could wait that long, as it was only 11 more days. Let me tell you it seemd like an eternity before those 11 days finally passed!!

October 31st finally arrived. My surgery day. My husband and I arrived at Rochester Methodist hospital and checked in by 8am. We proceeded to the surgical check in area and were greeted by a friendly nurse that directed us to a room where we would wait until they came to get me for surgery. As the time got closer I certainly got more anxious. After all I was a caretaker not a patient! (I even think someone once told me that nurses make the worst patients!!!)

Next a young man came in and started an IV in my right hand. Starting IV's every day at work I was certainly hopeful that he got it in on the first try! He did and I was relieved. I had to remember that I was at Rochester Methodist...home of the best right!?! Shortly after that the surgical aid came with the cart to take me to surgery. I kept thinking that theres gonna be pain afterwards but this time the pain will go away. I was finally relieved to know that soon I would be pain free. What would that be like?? After 15 years of pain I was ready for some relief. I knew that there would be some incisional pain but that that pain would eventually be gone.

Once I arrived in the surgical holding area my anesthesiologist was very positive and upbeat! He knew that I was nervous and I told him that I did NOT want to be asleep for the surgery. Honestly one of my biggest fears was being intubated for surgery...I opted for the spinal so I would be awake through the surgery. That did not bother me at all! There was also less chance of getting sick from the anesthdesia. They would give me some good relaxing drugs once in the OR. For my pain management afterwards another doctor had placed a seperate catheter that medications would be given to me after the surgery to control the pain. My surgery was over in what seemed like only a few minutes! I spent the next couple of hours in the recovery room before going back to my room. There I was greeted by my parents, brother and husband. They to were all relieved to know that my surgery was done.

My stay at Methodist was nothing short of wonderful!! The staff there were all outstanding as were the residents that were with Dr Trousdale. My surgery was performed on Monday and I went home that Wednesday. The night of surgery the nurse had me standing on my new hip at the bedside. The next day I was walking with a walker down the hall with my goal to get a little further then the last!

My recovery at home was quite simple. I went from the walker to crutches for a coulple of days, then the cane for 5 days but only when we left the house. 2 weeks after my surgery I joined the YMCA here in Mason City. I started out slow and would walk a few laps and also ride the recumbant bike. I was my own physical therapist!! I knew my limits and would push myself to do a little more each week. It has now been 4 months post op and I feel so much better. I cannot begin to tell you how good I feel. It is so nice to be able to walk without pain again. My dog will appreciate it when she and I can go for walks when the weather warms up!! I continue to go to the Y at least 5-6 days a week. I have to say that I truly enjoy it and feel much better once my workout is done. Dr Trousdale and his staff have given me my life back again and I am so thankful for what they have done. Not to mention the awesome care that I got from the staff at Methodist hospital. I do know that if I need to have surgery on my other hip I will not wait as long as I did this time!

Thanks for sharing. Do you know who the best doctor in Honolulu would be for total hip replacement?