"My doctor came in, and in his best Marcus Welby voice told me I was going to die,” Marlys Fox vividly remembers. She was just 32 years old, so “I wasn’t going to take that sitting down. When I immediately announced, ‘I’m going to Mayo Clinic,’ he told me that they would just get my hopes up, and it wouldn’t make any difference. He gave me six months to live."

The year was 1967, and Marlys was living and working in Des Moines. She’d made the appointment with her obstetrician/gynecologist after experiencing bleeding. The tests he ran showed choriocarcinoma, a rare, fast-growing cancer of a developing placenta. She hadn’t even known for sure if she was pregnant.

“I knew Mayo’s reputation, so I just got in my car and drove the three-and-a-half hours to Rochester,” she said. “I walked into the reception area, and told them I didn’t have an appointment but needed to see a doctor immediately. Then I just stood there and cried. After that, it was only a short time before I saw a lot of people.

She did give permission, of course, and began treatment. “I was one of the first people to have chemotherapy using methotrexate,” Marlys says. For the first two months she was in Rochester for a week at a time, receiving infusions of methotrexate and other cancer drugs.

When she was back home in Des Moines, she had to save all of her urine in a bottle every day, and send it to Mayo for testing. “I didn't actually go in a john for weeks or months at a time!” she laughs. “And I was always carting that fool bottle around… but I learned to make a joke out of it.”

Fortunately, the chemotherapy worked. “The counts started going down, and in a couple months the cancer was gone!” Between treatments she was still able to continue her work at Meredith Corp., and go to football games with friends.

Her hair thinned, but never fell out completely. “We all wore wigs then, so nobody really noticed,” she remembers.

One funny incident during treatment especially stands out to her. “My girlfriend was spending the week with me while I was at Mayo. We would go out at night, and then I had to run in for my chemo every morning,” she recalls. “One morning I was running late so I quickly jammed my wig on my head and off we went.

“While I was sitting in the chemo area waiting room, I started getting a severe headache. A couple of agonizing swipes over my head revealed that the pin used to hold my wig on the overnight stand was now jammed firmly into my head! We pulled it out and immediately started laughing. Soon everyone was laughing, and before long the entire waiting area was hysterical. The staff came running in to see if we all had flipped out!

Marlys moved to Chicago in 1971 and in the decades since, “I’ve gone back every year, and have never gone to another doctor outside Mayo,” Marlys says. “I’ve taken everyone I’ve ever known there, including my late husband.” H.M. “Sandy” Barba had two heart surgeries and two types of cancer, but lived another 25 years before finally dying of COPD. “His years of successful treatment further fortified my belief in Mayo Clinic.”

In 2006 she married Vince Backley, and much to the chagrin of the DMV, she has insisted on having her full name on her driver’s license: Marlys Fox Barba Backley. She still runs her own advertising sales company, Fox Associates, with her husband serving as chairman. 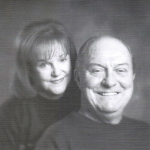 Marlys Fox and her husband Vince

Vince now goes to Mayo regularly, too, along with anyone else Marlys can convince to go. “An implantable cardio defibrillator keeps Vince going fast and furiously,” she notes. His experience shows, “You shouldn’t wait too long and only go as a last resort.”

“I appreciate that the doctors are not individual practitioners, so they don’t have to worry about getting new patients. They are not condescending when they talk to you, unlike some doctors who make you feel like a piece of meat.

“They do everything the scientific way,” she added. “They bring in a team so it’s not personal to one doctor. They identify the problem, and then work together to solve it.”