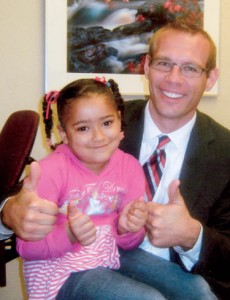 Anistasia Smith and her mother, Bridgette Grunewald, give a big thumbs-up to Brian Carlsen, M.D., and the team at Mayo Clinic who cared for the then 4-year-old in February 2011. Anistasia’s left thumb had been severed in a recliner chair.

“Anistasia was asleep, cuddling on her grandma’s chest. When the recliner was brought to an upright position, her thumb was caught in the chair’s mechanism and cut off,” says Grunewald. “My mother put pressure on Anistasia’s hand to control the bleeding and called 911.”

First responders retrieved the thumb and used a bag of frozen vegetables from the family’s freezer to keep it cold and increase the likelihood of the tissue surviving.

Anistasia was transported from her home in Milroy, Minn., to a hospital emergency room in nearby Marshall. The on-call surgeon recommended Anistasia go to Mayo Clinic to determine if the thumb could be reattached.

“The surgeon told us that the window of opportunity for reattachment is about six hours. More than two hours had passed already while we waited for the surgical consultation,” says Grunewald. Mother and daughter were flown by helicopter to Rochester. “Anistasia had pain medication and was calm on the ride. She comforted me and told me not to cry.”

At Mayo Clinic, Anistasia was met by a surgical team and was in an operating room within minutes. “They assured me they would do everything possible to reattach my daughter’s thumb,” says Grunewald. “I had complete faith in them. Their dedication took away my fear.”

Dr. Carlsen, a plastic surgeon, explains why reattaching the thumb was so important. “Half of all hand function is dependent on the thumb,” he says. “The fingers need something to grasp against. If we cannot reattach a severed thumb, we will place another finger or even a toe in the thumb position. It’s the most important digit.”

The complex surgery took more than 12 hours. “The bones in a child’s hands are immature and the blood vessels we need to reattach are very small, requiring microsurgery,” says Dr. Carlsen.

In a subsequent operation, Dr. Carlsen performed a skin graft on her hand. Anistasia had hyperbaric oxygen therapy at Mayo Clinic to help the wound heal. Hyperbaric oxygen therapy involves breathing pure oxygen in a pressurized room. The lungs gather up to three times more oxygen than is possible at normal air pressure, and the blood carries this oxygen throughout the body, promoting healing. During her hospital stay, Anistasia had to remain still to avoid injuring her thumb.

“Anistasia was very brave and not intimidated by the doctors and nurses who tended to her,” says Dr. Carlsen. “Everyone on the team fell in love with her infectious spirit.”

At follow-up appointments in May, Dr. Carlsen removed a surgical pin that attached Anistasia’s thumb to her hand. And, he asked her to touch her thumb to her pinkie. Anistasia, now 5 and in preschool, passed the flexibility test with flying colors.

“We are so thankful Mayo Clinic was able to reattach Anistasia’s thumb,” says Grunewald. “Dr. Carlsen and his team are amazing. We are privileged to have had the best of the best. Dr. Carlsen made us feel like we were his only patients. Anistasia says she wants to become a doctor now. I’d love for her to be as skilled and supportive as he is.”