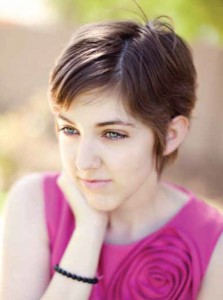 Her experience inspires Christenson to speak out for patients whose hope for a cure resembles a high-stakes lottery. In December 2011, she appeared on CBS’s “The Early Show” to promote the need for bone marrow donors. Being on the show fulfilled her altruistic request to Make-A-Wish Foundation.

“You feel so helpless because a bone marrow transplant is the only way to fight your disease,” she says. “It’s really scary when you don’t know if you’ll have a match.”

In March 2009, Christenson, then 15 and a high school freshman, had gone to the hospital with bruises, pale skin, fatigue and shortness of breath. A lab test found that only half the normal amount of blood was circulating in her body. She never went back to high school.

“I was too sick and had too little energy and was immune-compromised,” she recalls. “I couldn’t hang with friends. I couldn’t go out in public.”

Over the next six months, frequent hospital stays for blood infusions and treatment of blood clots and various infections finally led to a diagnosis: myelodysplastic syndrome (MDS), which caused her blood cells to die prematurely.

“I’m cured. I’m MDS-free,” Christenson says. But recovery has been a slow, unsteady process. She developed a complication when the transplanted cells and her own cells waged a battle of immune responses. In May 2011, she started an 18-month outpatient treatment at Mayo Clinic, where withdrawing her blood and exposing it to ultraviolet light quiets the cellular unrest.

“It has worked so well. I am thrilled,” says Christenson, now able to socialize again. She recently enrolled at a community college and plans to major in journalism at Arizona State University.

“MDS turns your life upside down,” Christenson says. “I’m so excited to be moving on.”

Through her medical crisis, Christenson learned about the need for donors. According to NMDP (marrow.org), more than 10,000 U.S. patients a year are diagnosed with life-threatening diseases for which a marrow or umbilical cord blood transplant from an unrelated donor may be their best or only hope of a cure.

About 70 percent of patients who need a transplant depend on the NMDP’s “Be The Match” registry for a donor. Minorities are vastly underrepresented in the registry. “In 2010, less than four out of 10 patients of all ethnic groups received the unrelated transplant they needed,” says Dr. Adams. “To improve the odds, the more people who join the registry, especially people of color, the greater the chances of finding a match.”

Motivated by her own second chance at life, Christenson has been recruiting for NMDP’s Registry since before her transplant. She created a website (www.cecisclimb.com) to tell her story and encourage others to join the registry.