A Scarf and a Blessing

His Holiness the Dalai Lama recently visited Mayo Clinic and gave a special presentation on resilience through mindfulness. The below story takes place during his visit to Mayo Clinic last year... 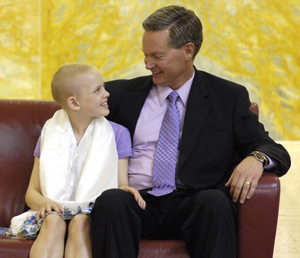 When Troy Keach, Mayo Clinic Education Administration, brought his 10-year-old daughter, Hannah, to the hospital one day during spring, 2011, he was expecting a difficult day. He wasn't expecting a blessing. But then he got in an elevator at Saint Marys for what turned out to be quite an uplifting experience.

It turns out that another Mayo employee, we'll call him Jim, was on that elevator, and the two got to talking, even if only for a brief moment. Jim asked about Hannah, who is being treated for leukemia and was in the middle of a difficult course of treatment.

By coincidence or providence (we'll leave that to you to decide), Jim had just visited with the Dalai Lama, who had been in Rochester for medical appointments. During that visit, the Dalai Lama had given Jim a scarf, which he had blessed, as an expression of gratitude. The spiritual leader hadn't specifically asked Jim to give the scarf to someone he thought might need it. But that's the thing about stories like this. Sometimes things just fall into place.

That Jim was even on the elevator was one of those things falling into place. After leaving the building, Jim realized that he'd left his cell phone behind and returned to retrieve it. That's what brought him to the elevator with Troy and Hannah. During the brief elevator ride, Jim asked Hannah her name. When she replied, he leaned over and put the scarf around her neck, saying, "Hannah, I want you to have this. I just received it from the Dalai Lama." He added that he'd say a prayer for her, and then they parted ways.

While Hannah didn't fully understand the meaning of that gesture at that moment, her father knew what it meant. And he said he was deeply moved by the gesture by someone who didn't know him personally and yet showed such care and compassion to his daughter.

Hannah kept the scarf close to her during the days it took to recover from her treatment. She held it as she said her prayers. Later, she and her dad did a little research to learn more about the Dalai Lama and his scarves. Now, Hannah's scarf spends most of its time in a frame in her room, a tribute to a generous gesture and a reminder of the support of so many she and her family received during her treatment at Mayo Clinic.

Keach says that while this was a unique circumstance, Hannah's gift is just one example of Mayo's culture of caring. "The culture here is real, and it doesn't exist like this in other places. It's who we are at Mayo," he says. "That one minute in the elevator gave us hope that we could get through this."