Fortunately for Sharon, life had become one big headache 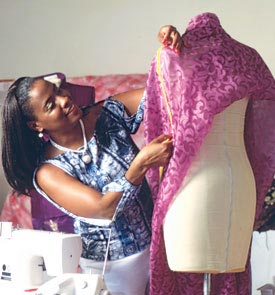 Anyone who's ever met Sharon Francis knows her laugh. It's always present, like a trademark accessory. Even when she isn't able to laugh with life, she can laugh at it because against all odds, Sharon is a survivor.

Consider her beginnings: When Sharon was only 20 and a single mother with three children, her own mother died of breast cancer. Without hesitation, Sharon took in her little sister and brother and raised them as her own. She worked two jobs to keep all five children in good neighborhoods, good schools and good food. "I got so overwhelmed that I developed a peptic ulcer," Sharon says, and she laughs.

Over the next 10 years, the tots became teenagers; Sharon earned an Associate of Arts degree and moved forward in her career as a graphic designer for a large corporation. In her spare time, she designed clothes and launched her own private fashion label, the S. Francis Collection.

"My mother didn't have much money for school clothes," she says, "so I learned to make my own. When I entered the business world, I literally had nothing to wear and I wanted to walk the walk. So I got out the machine, designed corporate wear with a flair, and it caught on."

Whatever came her way, she handled it without breaking a single manicured nail. Until her family history came to claim her.

"I was 31 when I found the lump in my breast," Sharon says. "It scared me. Every woman in my family had died from some form of cancer. We had zero survivors."

Sharon couldn't laugh off the statistics, but she did beat the odds. The surgeon removed a lump the size of a golf ball, and cancer became a mere sidebar to her success story. Nothing could take her down, not losses, not ulcers, not cancer, and certainly not that pesky pain that had begun on the left side of her head.

The Odyssey and the Agony

"I'd had plenty of toothaches and stomachaches and backaches in my life," says Sharon. "But I never had a headache." During the next weeks, the pain traveled from her head to her neck, then to her shoulders and her back. "When it spread into my face," she says, "it felt like an earache with a toothache. I probably took more than 100 over-the-counter pills a week trying to get rid of it, which only caused my ulcers to flare."

True to form, Sharon toughed it out until the day she passed out. "I was at work," she says, "and the pain was so severe, I fainted in the elevator." A co-worker took her to the emergency room. "By the time I got there, my behavior was confused and my vision was blurred. They did a CT scan to rule out a brain tumor and sent me home with a prescription for muscle relaxants. The medicine took care of my shoulders and back, but it didn't help my head."

For weeks Sharon sought answers. "I went from doctor to doctor and had test after test. They ruled out migraines and thought I had some form of tension or stress headache. But pain on only one side of my head baffled everyone. It didn't fit any pattern."

Sharon's life was shutting down. "I couldn't go to work. I couldn't cook. I couldn't clean. I couldn't sew. I couldn't function. All I could do was lie in the dark and pray that God would take the pain away. I stayed in bed so long, I developed bedsores. Finally, a friend actually demanded that I go to Mayo Clinic. I picked up the phone, told them my problem, and two days later the registration forms arrived in the mail."

It was May 2003 when Sharon took her three-month-old headache to Mayo Clinic. "Just being on the grounds gave me a feeling of peacefulness and confidence," she says. "It was like a park with trees and flowers and fountains."

Sharon was scheduled with Ruel Scott, M.D., a family medicine physician in the Mayo Primary Care Center. "He did a complete physical, ordered all the preliminary tests, and, because of my history, said he'd bring in a team of specialists. They would work together to reach a correct diagnosis and treatment. I'd never known anything like it. All I did was sit on the couch, and he took care of everything, then and there."

One of Mayo's defining strengths is multispecialty team medicine. Just as parts of the human body work together to function as a whole, Mayo Clinic in Jacksonville is a group practice of 342 specialists and scientists who work together, pool their knowledge and employ treatments and technologies often not available elsewhere.

Dr. Scott recommended that she be seen in Physical Medicine & Rehabilitation, Neurology, Gastroenterology and Gynecology. He ordered blood tests; an MRI of her head; X-rays of her back, chest and neck; electromyography, an upper GI, a thyroid ultrasound and mammograms. "I thought I'd be running all over town for weeks," Sharon says, "but they did everything right there, put the results straight into the computer, and all my doctors had access to the information."

The following week, Sharon met with neurologist David Capobianco, M.D.,. "He was very nice, very calming and all smiles. He said he knew what it was. I had hemicrania continua, which means a continuous headache on one side of my head, a type of migraine. I just burst out laughing."

For more than a century Mayo Clinic has attacked disease and disabilities by providing physicians and surgeons with access to continuous education and scientific studies. The three shields in the institution's logo represent Mayo's commitment to patient care, scientific research and medical education.

The day that Sharon met with Dr. Capobianco, all three shields were in play. "He said the condition I had was rare. Yet, he not only diagnosed it, he knew how to treat it," she says. "A study had been done on patients with seizures who also had this type of headache. The seizure medication that helped them would be safe for me. He wrote a prescription, and 30 days later, I was pain-free. When I went back to see him, I don't know which of us was happier. He said, don't move. Your condition is so unusual; I want to dictate all of this into the machine while you sit here just in case you think of some additional information that could be studied to help other patients."

That day, Sharon and her physicians could laugh together. After three months of agony, she was pain free.

Sharon returned to her work as a graphic designer and her passion — fashion design. "I had a commission to design a beaded wedding gown and all the bridesmaids' gowns," she says, laughing. "God had answered my prayers — all of them."

So imagine her surprise when a new appointment schedule arrived in the mail. This time, Sharon was baffled. She called Dr. Scott. "He reminded me that there had been something on the mammogram. It was very tiny, virtually invisible, and possibly nothing, but given Sharon's history, Dr. Scott wanted a biopsy.

"I laughed," says Sharon. "I knew about that little spot. It had been there for years and I'd had it checked, and it was benign. But he said we needed to check again. So I told him, yes, sure, okay, fine, whatever."

Once again, Mayo's three shields came to her defense. "They said they could do the biopsy without surgery. There was a new technology called MR-guided breast biopsy."

The National Cancer Institute has designated Mayo Clinic a Comprehensive Cancer Center. It is the first multicenter clinic in the United States to receive this designation for its entire cancer program. Mayo's integrated cancer research program is dedicated to developing new, safer, more effective drugs as well as immunologic and gene therapies. The clinic is at the forefront of studying cancers of the colon, rectum, breast, prostate and lung, as well as lymphoma and multiple myeloma. Mayo researchers are known for breakthroughs in the treatment of brain tumors, sarcoma and melanoma and for offering new hope against deadly cancers of the kidneys, ovaries, blood, liver, pancreas and neuro-endocrine system.

In April 2003, the Jacksonville clinic was among the first in the country to offer MR-guided breast biopsy, which uses a special vacuum-assisted needle to draw out suspicious tissue. Sharon was one of the first to benefit from the new technology. "They analyzed the sample and diagnosed it as DCIS, ductal carcinoma in situ," says Sharon. "It's an early cancer that is still confined to the breast ducts."

Sharon was scheduled for outpatient surgery at St. Luke's Hospital. "My surgeon, Dr. Jack Fulmer, had a pathologist right there with him," Sharon says. "That really impressed me. The cancer was so tiny that the pathologist wanted to analyze each bit of tissue as it was removed. He could tell Dr. Fulmer when to keep going and exactly when to stop because the tissue was clean. Dr. Fulmer didn't have to take any more breast tissue than necessary."

Sharon's surgeon did do one thing more, however. "He gave me the best surprise. He fixed the mess I had lived with since my lumpectomy. I came out looking like a new woman."

And Mayo wasn't finished. "To ensure the cancer was no more, I began a course of radiation therapy," Sharon says. "And I started to think I would be a survivor."

Seven months after her first Mayo appointment, Sharon's life is normal again. Of course for her, that means getting up at sunrise and going strong until 1 a.m. She's even helping Mayo help others. "Because of my family history of breast cancer and being the first survivor, I will be evaluated in the Familial Cancer Program. My sister and my daughter will eventually be evaluated for genetic cancer risk, too."

Sharon hopes the specialty clinic will follow her progress and use her history to aid other patients. "Mayo calls it doing their job, but, anyone who's ever been desperate to be heard, desperate to be helped, knows it's more than that.

"My doctors have a passion for helping people," she says. "Look at me. I went in with a headache and came out with my life."

And then she laughs.