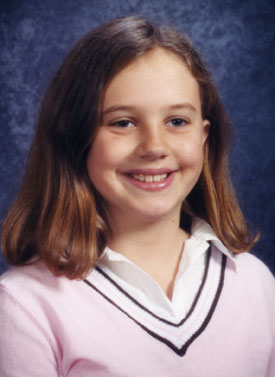 When 9-year-old Emily Crawford began having seizures, the symptoms were subtle.

"At times, Emily just wouldn't respond to anything," says her mother, Rebecca Crawford. "She would look around, fidget with her hair or buttons, or move her foot, but she didn't seem to know what was going on. She wasn't in the present."

Over the next few weeks, Emily's episodes became more disturbing. Her parents took her to a pediatrician. The results of an electroencephalography (EEG) test came back normal. But a pediatric neurologist detected something suspicious on a magnetic resonance imaging (MRI) scan of Emily's brain and recommended the Crawfords take Emily to Mayo Clinic for a thorough evaluation.

At Mayo Clinic in Rochester, Minn., Emily underwent several more tests. Eventually, doctors determined she was experiencing complex, partial seizures caused by a tumor in the left temporal lobe of her brain.

Removing the tumor would require a two-part surgery. The first would map Emily's brain to pinpoint what area of the brain was generating her speech, and how much the tumor was interfering with it. During the second surgery, the tumor would be removed.

Both surgeries were a success, and the tumor was benign. Although there was concern that surgery might affect Emily's speaking abilities, testing has revealed she is above her age level for speech.

Emily has yearly follow-up testing at Mayo Clinic and has had one subsequent surgery to remove a regrowth of the tumor.

"I give so much credit to Mayo Clinic for helping us through this," says Emily's mother. "We were so pleased with the people there. The nurses were so nice. The doctors were so nice. They didn't talk down to us. They told us what we needed to be told. They were open to questions. We'd definitely recommend Mayo Clinic to others."