A new beginning: Woman with rare disorder gets life back after stem cell transplant 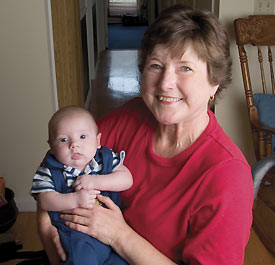 Instead of needing a caregiver herself, Cindy Farmer now is able to care for her newborn grandson, Ayden, after a successful stem cell transplant.

For years, Cynthia Farmer was locked in a battle with an unknown opponent. The single mother of three suffered from an array of annoying symptoms that got progressively worse as the years passed. Doctors couldn't determine what was wrong with her and as the ailments continued, caring for her children — and herself — became a major challenge. Self-described as tenaciously independent, Farmer soldiered on the best she could.

She first sought help from the Medical College in Virginia in the late 1980s, but without a diagnosis and appropriate treatment, her health deteriorated to the point that she was legally blind.

"That's when my physician at Medical College suggested I seek a second opinion from Mayo Clinic," Farmer recalls.

Arriving in Jacksonville in January 1990, she met with Mayo Clinic oncologist Dr. Gerardo Colon-Otero, who recognized her symptoms as POEMS, a rare blood disorder. It was the first time she had even heard of the disease.

"Many physicians are not aware of POEMS because it is so rare, they've never seen someone with it," says Colon-Otero. "There are not too many papers written about it either. So many patients we see have gone undiagnosed for many years."

After years of disability and uncertainty, Farmer recently earned a second master's degree.

Researchers believe POEMS syndrome involves an overgrowth of bone marrow cells (plasma cells), which produce chemicals that damage other parts of the body. The syndrome's name is an acronym for its five most common symptoms: polyneuropathy, organomegaly, endocrinopathy, monoclonal gammopathy and skin defects (see box).

The first signs of the illness came in 1986, when Farmer was just 33 years old. While the disease itself is rare, that she got it is even rarer. Most of its victims are male and at least 50 years old when first diagnosed. It is neither inherited nor contagious. Many of the symptoms, such as fatigue, aches, pains, fever, diarrhea, edema and vision changes, mimic other, more common diseases. Patients don't necessarily seek treatment, hoping symptoms will just go away. Doctors are also less likely to diagnose POEMS, because there are few documented cases.

Mayo Clinic is a leader in researching the disorder. It diagnoses and treats its patients using a multidisciplinary team of physicians, including neurologists, endocrinologists, radiation oncologists, physical therapists and others.

Farmer packed up her three children, who were 3, 7 and 9 at the time of her diagnosis, and moved from Virginia to Jacksonville so she could get ongoing treatment. She says it was a chaotic and scary time in her life, but she remembers her first visit to Mayo Clinic with fondness.

"From the moment I first drove onto the campus, I felt engulfed in the serenity of its surroundings," she says. "The landscaping, the beautiful fountain, the light, open building and the confident staff filled me with such peace. I knew I was in the right place."

Doctors got to work immediately. Several experimental treatments followed Farmer's diagnosis, including the implantation of a deep brain stimulator and oral chemotherapy. Her quality of life, however, continued to decline. She was unable to write her name, walk or feed herself. Then Colon-Otero suggested another experiment — a stem cell transplant, using cells harvested from her own body, known scientifically as an autologous stem cell transplant.

What POEMS stands for:

"He didn't know if I would respond well to the transplant as I had been fighting the disease for so long," says Farmer. "However, since two of his other POEMS patients, who had the disease for just a few years, did improve after their transplants, I agreed to try it, too."

While the procedure was complicated, involving two rounds of intensive, high-dose chemotherapy, followed by the stem cell harvesting procedure, and delayed for four months so she could recover from a leg injury, the results were well worth the struggle.

"For the first six months after my transplant, it was difficult," says Farmer. "Then it was like waking up out of a dream. Each day got better and better. The first time I was able to make a phone call again, or hold a glass by myself to drink was a thrill. Every week I looked forward to seeing what I could do that I couldn't do the week before."

"Whether any of the POEMS patients we've treated with a stem cell transplant will be cured or not is still unknown, but most of the patients who have received the transplant have improved dramatically," says Colon- Otero.

Farmer is an example of dramatic improvement. Since the transplant, she's earned a second master's degree and is looking for a job as a rehabilitation counselor. She's regained limited mobility with the use of a walker and has been taking care of her newborn grandson, Ayden, on weekdays.

In her darkest days, she never believed she'd reach her 50th birthday. Now 53, she says she's not living her disease anymore — she's living her life.

POEMS is also known by other names:

"Three years ago I was writing my will and making arrangements for my children," she says. "Now I'm feeling great and going on interviews to start a career that's my heart's desire — to help others."

Farmer is also thankful for the Mayo staff with whom she's developed a personal relationship over the years. From swapping gifts with her phlebotomists at Christmas to sharing family stories and photos with doctors and nurses, the friendships she's cultivated have carried her through difficult times.

"Everyone has been so gentle and kind, and the atmosphere is much more personal," she says. "Before, I was just a disease. At Mayo, I'm a person."

Thank you for sharing this story. My husband has POEMS as well. He was diagnosed in 2011 after being first diagnosed with CIDP. It has been a long and arduous battle. He had a SCT in 2011 as I was pregnant with my 3rd little daughter. He improved prey, but now is seeing some symptoms return. The doctors here are great, but many have not heard of POEMS, so we have to travel for his medical care.