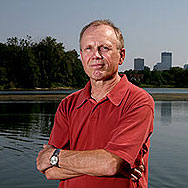 Denny Waite is grateful for a quick recovery following robotic heart surgery at Mayo Clinic. It allowed him to return to running his construction business with only a short interruption.

Denny Waite didn't expect what was in store for him when he made a routine visit to his doctor in January 2009. A 61-year-old construction contractor from a Twin Cities (Minneapolis-St. Paul) suburb, Denny had no history of medical problems, and on the day of his appointment he felt fine. But when the doctor listened to Denny's heartbeat, he heard a heart murmur that hadn't been there during Denny's previous visit.

That murmur kicked off a string of tests and numerous consultations with physicians. After being diagnosed with a serious heart condition and learning of the available treatment options, Denny decided that his best bet was Mayo Clinic in Rochester, Minn.

A search for experience
Following the discovery of Denny's heart murmur, his doctor recommended Denny see a local cardiologist. The cardiologist recommended several cardiac tests, including an echocardiogram, electrocardiogram and angiogram. Based on the results of those tests, Denny was diagnosed with mitral regurgitation caused by mitral valve prolapse.

Following his diagnosis, Denny talked to several other cardiologists in the Twin Cities area and was told there were two surgical options for mitral valve repair: open-chest surgery or a minimally invasive robotic mitral repair. The robotic surgery appealed to him because his recovery time would be much shorter than if he underwent open-chest surgery, but he wanted a surgical center whose cardiovascular surgeons had considerable experience with the procedure.

"I'm a businessman with a construction and mechanical background. I was looking for someone with a lot of experience with this piece of equipment," says Denny. "I found several places in the Twin Cities that could do it, but the procedure was still new to them. So I did more research and talked to more physicians. Everything pointed to Mayo Clinic. In the end, choosing Mayo was a no-brainer. It has a great reputation, and everyone told me Mayo has the best program in the area for what I needed."

A smooth process
After making his decision, Denny called Mayo Clinic to request an appointment. He was scheduled to see Rakesh Suri, M.D., D.Phil., a Mayo cardiovascular surgeon. During his first visit, he not only talked with Dr. Suri but also met with a Mayo Clinic cardiologist and underwent several more tests to assess his heart function.

"Everything went smoothly. They made it easy to get everything I needed in one visit," says Denny. "When I asked Dr. Suri how many surgeries he had done to fix mitral valves, he told me he had stopped counting around 200. That made me feel very comfortable."

Denny underwent the surgery to repair his mitral valve in May 2009. During the surgery, Dr. Suri and co-surgeon Harold Burkhart, M.D., relied on three-dimensional, high-definition video guidance to clearly see the heart's anatomy. They used robotic instruments to perform the precise valve surgery exactly as it would have been done via an open chest but through several very small incisions instead.

After minimally invasive heart surgery, Denny remained in the hospital for three days, considerably less time than would have been required if he had had open-chest surgery. Open-chest surgery usually involves a seven- to 10-day hospital stay.

A speedy return to business as usual
One week after he was released from the hospital, Denny was able to stop by a job site to check on progress. "The surgery not only saved my life, but helped me get back to work quickly," says Denny. "Since I run my own business, that meant the world to me."

A month after his dismissal, Denny went to Mayo Clinic for a check-up, and then he took a vacation in Colorado, where he went white-water rafting and hiking.

"I felt great," says Denny. "I think it's amazing I was able to do that level of activity without any trouble just a month after surgery. I'm very glad I chose the robotic procedure."

Although Denny receives follow-up care from his local physician, he says he wouldn't hesitate to return to Mayo Clinic.

"You can hardly live on this planet without hearing Mayo Clinic spoken of in glowing terms. But before this, I didn't have any personal experience with it," says Denny. "My wife and I were so impressed. If I ever need surgery again or have any other major problems, I'll definitely go back to Mayo."