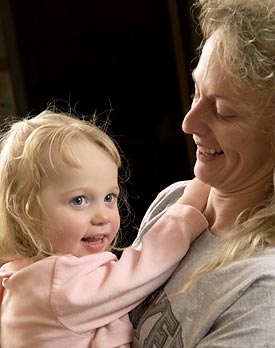 "When she had to take anti-seizure medication, we could always get her to take it if we mixed it in mashed potatoes," says her mother, Mary. "Shelby loved mashed potatoes. It would be too cruel for the rest of us to eat them, knowing Shelby couldn't have them too."

Shelby has been on the ketogenic diet, drug-free — and seizure-free -- for several months. Her father, Kelly, learned about the diet on the Internet. Shelby's local physician referred the family to the Pediatric Epilepsy Program at Mayo Clinic in Rochester for help administering the diet. Close collaboration with an experienced dietitian knowledgeable about the diet is essential. Under the supervision of a physician, the dietitian works closely with the patient's family to carefully control the diet. For reasons unknown, the diet inhibits seizures, primarily in childhood epilepsy.

Shelby tried several anti-seizure medications in the six months after her seizures began, but none succeeded in controlling her two dozen daily seizures.

"My two oldest daughters, Allie, 15, and April, 13, and I followed Shelby around like a shadow so she wouldn't hit the floor when she had drop seizures," says Mary.

Shelby has atonic epilepsy, which causes momentary loss of muscle control and dropping to the floor.

"It seemed as if Shelby had a string attached to her head that would suddenly pull her head to the floor," says Mary. "It was traumatic for our family. The two older girls were afraid Shelby would die. We stopped going to restaurants. Shelby's development seemed to stop when her seizures began.

"I was reluctant to try the ketogenic diet, but my husband said we didn't have anything to lose," says Mary. "I agreed to try it. I'm so glad I did. What this diet did for our family is miraculous. We can go to restaurants now. We take special food for Shelby. We see signs of Shelby's personality emerge now. She smiles and giggles and wants to play."

"I called the dietitian at home one night because Shelby had a fever. Children's Tylenol contains sugar, which Shelby cannot have," says Mary. "I needed to know what I could give her. The dietitian checked and told me Shelby could have adult Tylenol but to consult our pediatrician for the correct dosage, based on Shelby's age and weight. Mayo Clinic has been such a godsend for us."

The Birch family hopes Shelby can be weaned off the diet in a couple of years and remain seizure-free. In the meantime, the family continues its vigilance at protecting Shelby from the many foods not allowed in her diet.

"Our 4-year-old daughter, Libby, is very protective of Shelby," says Mary. "She found Shelby with a package of crackers and screamed like another child might if a baby had a sharp knife. For the time being, our family and friends know the importance of keeping Shelby from the foods that will cause her seizures to return. They see how dramatically our life has changed since Shelby began this diet. The least we can do is not eat mashed potatoes."