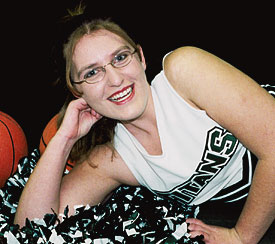 When Tiffany Hanson joined the speech club at school, her parents said to each other, "This is not Tiffany."

The teenager didn't like to be in front of people. Then she became a cheerleader.

The reason for the change? Tiffany had a temporal lobectomy, or brain surgery, to stop seizures caused by intractable partial epilepsy. Tiffany had seizures since she was 6 months old. Initially, they were infrequent. When she turned 5, they increased. The seizures were mild but left her exhausted. She lost all recollection of anything that occurred 24 hours before and after a seizure, leaving her with few childhood memories.

"We protected Tiffany and discouraged her from doing physical things, such as riding a bike or in-line skating, where she might be hurt," says her mother, Roxanne Hanson. "We found 'safe' things for her to do. Therefore, she was a pretty idle child. She was always with us."

When Tiffany turned 14, the seizures increased dramatically. The family went to Mayo Clinic, where Tiffany was admitted to the hospital. Her medical team waited for a seizure to occur so they could monitor what happened in her body during the event. Testing indicated she had scar tissue on her right temporal lobe and physicians recommended surgery as an option.

"We talked about the pros and cons of surgery but left the final decision up to Tiffany, who as 15 at the time," says Roxanne. "She could have continued the way she was and been fine, although her life would have had significant limits. Tiffany wanted to have the surgery with the hope of improving her life."

Tiffany's doctors didn't "sugar coat" anything, her mother says. They put Tiffany at ease by talking to directly to her, asking for her input and counseling her not to worry. One went so far as to call Tiffany the night before surgery to wish her a good night's sleep.

"That really blew me away. We had been to so many doctors and hadn't experienced anything like that," Roxanne says.

Three days after Tiffany's surgery, the family returned home to North Dakota and waited to see if the seizures resumed. One week passed. Two months passed. Six months passed. No seizures. One and a half years later, Tiffany is seizure-free. And driving.

Had Tiffany's seizures not stopped, she would not have been able to drive. When her classmates took the classroom portion of driver's training, she had asked her teacher if she could take the class too, so she wouldn't feel left out. At the time, Tiffany knew she probably would not be able to drive. Now the teenager has her driver's permit and has a driver's test scheduled.

Being able to drive isn't the only thing about Tiffany that has changed.

"We refer to the 'old Tiffany' and the 'new Tiffany,'" says Roxanne. She was always a happy child, but you should see her now. Everyone comments about how different she is. The changes started within weeks after surgery. She began blossoming, making up for lost time. Before surgery, she was fearful someone would see her have a seizure, so she didn't put herself out there. Now, she's a cheerleader, in speech club and gaining independence. When we used to go the mall, she never left my side. We never had to wonder where she was. Now she's off on her own and we can never find her! She has her own life now, which is the way it should be."