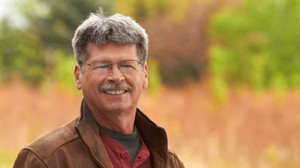 Doug Yaus had always been an energetic, healthy man. "At 43, I had never even broken a bone," he says.

That was until April 1998 when he noticed in a mirror that the whites of his eyes looked yellow. "In just two days, my skin was jaundiced," says Doug. His family doctor in Xenia, Ohio, ordered blood tests.

As he waited a week for results, his appetite diminished. More tests followed, including an ultrasound and computed tomography (CT) scan of the liver. He then saw a local gastroenterologist, who did a CA 19-9 test, a tumor marker blood test. Doug was told his liver tests were "way out of whack." He wasn't prepared for what he heard next.

"I was told that I may have pancreatic cancer and that there was nothing that could be done for me," he recalls. "I almost fainted, and had to lie down on the exam table. I went home without any hope." Six weeks passed; then a family member urged Doug to seek care at Mayo Clinic in Rochester, Minn.

Doug made the call and three days later he and his wife, Evelyn, arrived in Rochester for tests. One, called an endoscopic retrograde cholangiopancreatiography (ERCP), helped confirm it was not pancreatic cancer. More tests followed, leading to the diagnosis of bile duct cancer (cholangiocarcinoma).

As many as 10 percent of patents with this cancer have a condition known as primary sclerosing cholangitis (PSC), a chronic inflammatory disease of the large bile ducts. For others, the cause of the cancer is unknown. "PSC is a tough disease," says Gregory Gores, M.D., a Mayo Clinic hepatologist. "Patients with PSC already have a disease that inflames their bile ducts and causes symptoms, and then cancer develops. It's important once a diagnosis is made, to respond promptly with treatment."

Doug was informed that he was a candidate for the cholangiocarcinoma liver transplant program. For patients who have small tumors whose cancer has not spread outside of the liver — and meet other selection criteria — treatment entails multiple steps over a period of months leading to liver transplant, an option available at only a few health care centers in the world.

Hepatologists, medical and radiation oncologists, endoscopic specialists and transplant surgeons, to name just a few of the professionals, are members of the care team. "The combination of therapies and team approach to care is designed to bring the best possible result," says Dr. Gores.

"At Mayo, you are involved in your care," Doug says. "There are no vague answers. Your caregivers explain what, why and how things are going to proceed, and there's a sense of urgency about your care. You're part of a team that takes you through a methodical process that is meant to save your life."

After a two-week break, he was admitted to the hospital for brachytherapy, which delivers a higher than normal dose of radiation in close proximity to the tumor. "My wife was there with me the whole time," Doug says. "To spell my wife, my dad would drive from Ohio to Rochester."

In August, Doug underwent exploratory surgery, which determined there was no spread of the cancer outside of the liver. Doug was put on the transplant list.

To date, Mayo Clinic surgeons have completed more than 115 liver transplants for bile duct cancer. The survival rate at one year is 90 percent, and at five years is 75 percent.

"When Dr. Gores told me the success rate with liver transplant, it gave me the spirit to fight on," remembers Doug. He returned home to Ohio to wait for news that a liver was available. On average, the wait is more than a year at Mayo Clinic in Minnesota.

For Doug, the waiting was not easy. Cholangiocarcinomas obstruct the bile ducts, which in addition to jaundice, cause malabsorption of nutrients, and other symptoms. "I couldn't eat much and I had a stomach ache that lasted for months," says Doug.

The discomfort was eased with the placement of biliary stents (thin, hollow tubes used to keep the ducts open). Unlike the stents used to open coronary arteries and through which clean blood flows, biliary stents are replaced as bile obstructs them. "As ducts become plugged, they become infected and cause other symptoms," says Dr. Gores. For Doug, stents were replaced every two to three months.

As time passed, Doug's weight plummeted, from 205 prior to his diagnosis, to a low of 125 pounds. "I was so thin it hurt to sit on hard surfaces for more than a minute or two," says Doug. "But I held on."

As Doug moved up the transplant list, he and Evelyn returned to Rochester. They stayed at the Gift of Life Transplant House for nearly three months until the call came at 5 a.m. on May 14, 1999, that a liver was available.

Charles Rosen, M.D., performed Doug's liver transplant. "People asked me if I was scared," recalls Doug. "But I had been sick for a year and was entirely ready to have the transplant."

"My surgeon said that the new liver immediately began producing bile," says Doug, who awoke from surgery feeling better, and by the next day, was hungry. Now a decade post-transplant, he says the experience was "like a dream."

Today, Doug continues to be seen annually by Dr. Gores. As one indication of his health, his weight is 195 pounds. "I can do and eat anything I want," he says. "I wake up every day thankful for my wife, who went through this with me every step of the way, my caregivers, and remembering my health is a gift. I call May 14 my new birthday."