Surgery at Mayo puts softball pitcher back in the game 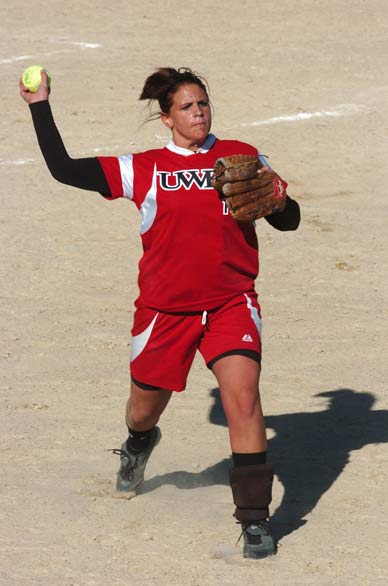 When softball pitcher Brittany Rathbun developed thoracic outlet syndrome — a narrowing of the subclavian vein, which runs from the heart down the arm — a rib resection (removal) at Mayo Clinic restored function in her hand and put her back in the game.

Today, female athletes are experiencing many of the same sports-related injuries their male counterparts have for decades. "We're playing more types of sports and playing more competitively than ever before," says Brittany Rathbun, a fast-pitch softball player. "I not only delivered 80 to 100 pitches per game, but also did weight training on a regular basis to strengthen my upper body."

Brittany began pitching when she was eight years old. Through the help of a local pitching coach and her own tenacity, she was pitching at the high-school level by seventh grade. Brittany pitched through high school without problems, except for some mild swelling in her elbow. But while playing for the softball team at the University of Wisconsin in River Falls, her pitching hand and arm began to swell and turn black and blue, and she experienced numbness and tingling. "The team trainer suspected it was an inflamed tendon and suggested I go to a hand clinic," says Brittany. The physical therapy prescribed there didn't help and, in fact, may have exacerbated the problem.

Brittany's condition limited her performance on the pitching mound. The swelling in her hand became so severe that she was literally benched in the middle of a game with a problem that didn't have a name or a solution.

"I felt like I had thrown myself a curve ball," recalls Brittany.

Tracing the source of the problem
Brittany was born in Rochester, Minn., at Methodist Hospital, on Mayo Clinic's Rochester campus. Her mother works there as a pediatric nurse. "When I told my mom what was happening, we both knew what I needed to do," remembers Brittany. "When something is wrong and no one else can determine what to do, you go to Mayo Clinic."

At Mayo Clinic, Brittany eventually saw Audra Duncan, M.D., a vascular surgeon. "First, we tested the arm's circulation using a specialized ultrasound," says Dr. Duncan. "Certain movements caused the blood flow to her hand to stop and we traced it to Brittany's axillary vein, which runs underneath the clavicle [collar bone]."

Brittany was diagnosed with thoracic outlet syndrome, a severe narrowing of the subclavian-axillary vein that restricts blood flow and nerve conduction to the hand. "Normally, when we see persistent swelling, we also find a blot clot somewhere, but Brittany did not develop a clot," says Dr. Duncan. "Her arm was already forming collateral veins — trying to manufacture its own way to get blood to her hand."

Thoracic outlet syndrome is often confused with nerve injuries and other sports-related injuries, but prompt diagnosis and treatment are crucial, especially if a blood clot has formed.

A homerun surgery
"Mayo Clinic sees three or four cases of venous thoracic outlet syndrome each year," says Dr. Duncan, "and often there is a clot involved that can be treated with clot-busting medication." Even though Mayo Clinic treats about 10 cases of nerve-related thoracic outlet syndrome each year, Brittany's was a unique situation. She didn't have a blood clot and developed advanced symptoms early.

"Brittany had numbness and tingling in her hand and those symptoms meet the criteria for surgery to correct the problems," says Dr. Duncan, "especially since there was no clot to dissolve or treat."

The surgery — called a first rib resection — involves removing a rib through an incision under the armpit. "The axillary vein is next to the main artery and the brachial plexus nerve," explains Dr. Duncan. "So while it is a tight space to work in, the scar is not in a visible place. Mayo Clinic has had great success with this type of surgery."

There are three causes of thoracic outlet syndrome. About 95 percent of cases are nerve related or neurogenic, like Brittany's. Other causes are athlete-induced vein clots (3 percent) and artery problems (2 percent). "Eventually, Brittany may have developed a clot, but earlier intervention gave her a much better outcome," says Dr. Duncan.

Mayo Clinic has been doing first rib resections since the early 1990s. Removing the rib opens up space so the vein has more room. With the rib out of the way, the vein isn't pinched off when the arm is raised over the head or extended. "Following surgery, athletes can resume their normal activity after a couple week restriction," says Dr. Duncan. Though there should be no lifting, pushing, pulling or repetitive motions during the restriction period, 80 percent of patients return to full activity within three months.

"Thankfully, I had symptoms before I ever developed a clot, so my recovery and results were outstanding," says Brittany, who returned to pitching the following spring. "I would have certainly been ready for the fall league, but I was involved in an ATV accident three weeks after my surgery," she says. "That was my first and last ATV ride."

These events have not interrupted Brittany's plan to become an elementary school teacher. "I would love to end up teaching back in Rochester and do some coaching, as I also will have a coaching minor when I graduate," she says.

"I'm thrilled that Mayo is so aggressive and progressive in their approach to patient care," says Brittany. "My doctor could tell I was a weightlifter and suspected this could be the problem the minute I walked in her door."