Christina goes to the head of the class 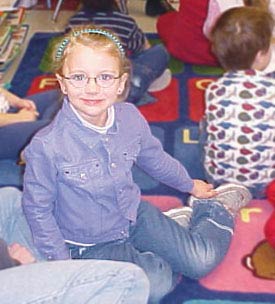 Christina George recently won an award for overall academic achievement in her kindergarten class. At the award ceremony, many in the crowd were in tears, including her parents, Paulette and Larry.

Their emotion and surprise was to be expected. By the time the little girl was 4 years old, she had only ever said one complete sentence, words from a song called "Good Morning Beautiful."

The story of Christina's amazing achievement starts when she was an infant, living in Texas. At 7 months old, Christina had a seizure. Other seizures followed, and they never stopped. Christina's physicians could not find a cause of the seizures.

"With seizures that were strong and difficult to control, Christina was on the critical end of seizure disorder, or epilepsy, without relief. Our lives had become one long seizure," her mother says. "She was nonfunctional in cognitive ability and development. I could not leave Christina alone for a moment. Her crib was padded, but she would thrash around when she had a seizure and could get hurt. The condition was very confining for our family. We took her to Mayo Clinic for the first time when she was 1 year old. Right away, they found a lesion in her right temporal lobe that could be the cause of her seizures."

For the next year and a half, the family went back and forth between Texas and Minnesota for Christina's care. The Georges learned about the ketogenic diet, a specialized high-fat diet, developed at Mayo Clinic in 1921 to treat seizures. Together they worked with Christina's physicians and a dietitian to manage the diet.

"The ketogenic diet provided relief from seizures, but it is so intricate that I couldn't leave her with anyone else," says George. "The nurses and physicians at Mayo Clinic knew how to care for Christina. That was obvious from her first hospital stay there. Her room was all prepared for her with a padded crib and a supply of emergency medicine. The nurses knew the protocol for the ketogenic diet and made sure that anyone who provided care for Christina knew it as well."

The family decided to move to Wisconsin in mid-1999. "We needed to be closer to Mayo Clinic, to be near people who knew how to treat Christina's condition," says George. "My husband found a job in Wisconsin so we could be within a day's drive of Mayo Clinic. Within a few months, Christina's seizures stopped. I credit prayer and the ketogenic diet for that first miracle."

Two years later, Christina's physicians recommended slowly removing her from the ketogenic diet, which most children are on only two or three years. Within a week of reducing the diet, Christina's seizures returned. Her breathing began to stop during the seizures. Medication options had been exhausted.

Christina's team of physicians recommended surgery to remove the complete right temporal lobe of Christina's brain. The girl hadn't initially been a candidate for the surgery because her seizures had involved her entire brain. But after having been on the ketogenic diet and seizure-free for two years, Christina's seizure activity was localized in the area of a lesion in her right temporal lobe. Surgery had become an option.

Her parents needed a little time to adjust to the idea of having so much of Christina's brain removed.

"We were reluctant at first, but something had to be done because the seizures were even more serious now, with her breathing stopping," says George. "We decided it was Christina's only chance to have a life without seizures."

Christina had the surgery in December 2001 when she was 4 years old. She had her last seizure a few days later, on Christmas Day.

"When she awoke from surgery, I could tell she was different - that the part that caused the seizures was gone," says George. "She saw her dad standing at the end of her hospital bed and said, 'Papa, my daddy.' We were so happy that her memory was intact and that she could think and speak. I had always wanted Christina to be able to talk to me and tell me what she was thinking."

Within months after surgery, Christina was talking and playing normally with toys for the first time in her life. Today, she jumps, runs, roller skates, reads, adds numbers and argues with her brother about whose turn it is to use the computer.

"Surgery was a scary thing but the miracle Christina needed to go forth and grow. She shows us every day more and more things she can do," says her mother. "We can't thank God or Mayo Clinic enough. The doctors and nurses took care of our daughter when we couldn't. We worked together to get Christina better."