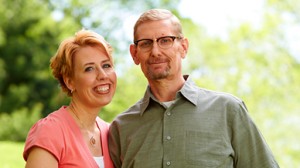 A series of miracles. That's how Marshall Curtis describes the care he received at Mayo Clinic.

Marshall came to Mayo after being diagnosed with cirrhosis, the result of a rare genetic disorder. He was gravely ill, and his condition was complicated by obesity. Marshall and his family believed that if anyone could handle the complexity of his condition, it was Mayo Clinic.

"One of the things that impressed us very quickly was the quality of the Mayo system," says Marshall. "Every time we saw a physician, that physician knew what had happened in the appointment immediately prior."

For a year and a half, Marshall's doctors kept him alive while he waited to receive a liver transplant.

"They pulled one idea, one miracle out of the hat after another," says Marshall, recalling how each decision seemed to buy him another day.

A serious concern during this period was Marshall's weight, which posed a risk both to his health and the ultimate success of the transplant. Marshall's doctors recommended he have a relatively new procedure that combined transplant and bariatric surgery. He agreed, and in June 2011, had both surgeries.

"It's like life starts over, like someone reset the clock," Marshall says of the experience. "I have a new life, a new set of firsts. And a new beginning."

Marshall, now a Mayo Clinic volunteer who often meets with patients awaiting transplant, credits his doctors — and his donor — for this new beginning.

"None of this would be possible without the care I've received at Mayo," he says. "I'm particularly grateful for my donor, and for the fact that they chose to give the gift of life. It's a gift that occupies some portion of my mind every day, because I know for a fact that without it I wouldn't be here."