Giving back after a successful stem cell transplant 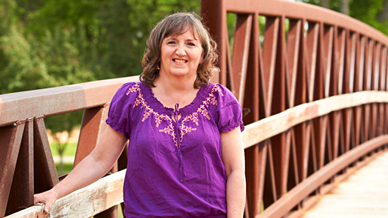 When Wendy Hamilton's daughter graduated from college, the two celebrated by hiking in national parks throughout the West. Hamilton was surprised when she had to stop and rest on the trails.

When Wendy Hamilton's daughter graduated from college, the two celebrated by hiking in national parks throughout the West. Hamilton was surprised when she had to stop and rest on the trails.

"I felt so winded," says Hamilton, "but I attributed it to higher altitudes and middle age. I thought we tried to do too much."

When she returned home to Minnesota, however, her symptoms continued. "I just felt unwell," says Hamilton. "I'd feel close to normal during the day and then run a high fever at night."

Family doctors first thought she might have picked up an insect-borne illness while on vacation. But then she was diagnosed with an advanced and aggressive form of non-Hodgkin's lymphoma. Hamilton went to Mayo Clinic for help.

Because she wasn't responding to chemotherapy, her Mayo doctors felt Hamilton's best hope was an autologous stem cell transplant. This meant harvesting and preserving her stem cells and then, after treating her to high-dose chemotherapy and radiation, reintroducing the cells into her body.

It worked. After the transplant and months of daily monitoring, Hamilton's body showed no sign of the disease. And now, years later, she continues to be healthy.

In talking about her experience, Hamilton says that though she can't "pretend to understand" the research and medicine that her Mayo doctors were able to employ to save her, she will never forget their care.

Hamilton turned her gratitude into action. She became a lab technician and now works in Mayo Clinic's phlebotomy lab. And, she volunteers with the Leukemia & Lymphoma Society to help others whose lives are affected by blood cancers.

"I'm giving back in honor of all the people who gave me a second chance at life," she says. "I want to instill in others the same type of hope and happiness I have."