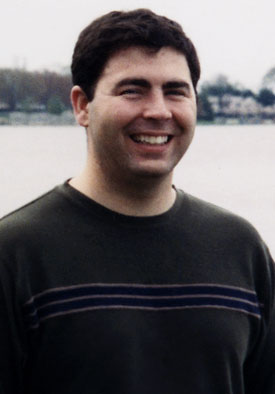 Dan Smith is grateful that brain surgery didn't sideline his goal of becoming a computational physicist.

Dan Smith was a graduate student in physics when he noticed occasional numbness in his left hand. His physician thought it might be carpal tunnel syndrome. When the numbness affected Dan's entire arm and cheek, the physician referred him to a neurologist.

An MRI and a CT scan revealed a lesion the size of a goose egg in Dan's brain. The lesion — composed mostly of pooled blood — pressed on the part of the brain that controlled sensation. Dan's neurologist recommended he see a neurosurgeon. He chose to go to Mayo Clinic in Rochester, Minn., where he met John Atkinson, M.D.

To determine the lesion's growth rate, Dan had MRIs at Mayo Clinic two weeks apart. The exams helped Dr. Atkinson determine that the lesion was slow-growing and was not a tumor. Still, it needed to be removed and the area repaired.

With a metal halo frame affixed to Dan's head, Dr. Atkinson made an incision above Dan's right ear and extended it to the top of his head. He then cut a small hole in Dan's skull and drained the blood from the lesion, called a cavernous malformation. The operation was a success, with no impact on Dan's neurological function.

Dan remained at Mayo Clinic for four days after surgery and had annual MRIs and EEGs for five years to monitor the area of his brain for possible recurrence of the malformation. He has had no recurrence of the lesion.

"Dr. Atkinson had done thousands of brain surgeries, so I felt confident I had the right doctor and was at the right place," says Dan, now a computational physicist studying the upper atmosphere and near-space environment of Earth. "I'm grateful to have had the opportunity to pursue this passion."