An upbeat attitude and a brisk tempo keep this musician playing 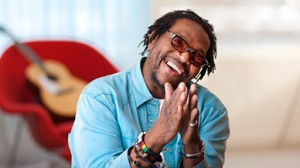 Wain McFarlane knows how to work a problem. When hypertension caused Wain's kidneys to fail in 2006, he built dialysis into his busy schedule. And when, just months after receiving a kidney from his 26-year-old niece, Wain was diagnosed with liver cancer, he knew he and his Mayo Clinic team would deal with it, quickly.

"I didn't stop," says Wain. "Stopping feeds your illness. I wanted to win, so my attitude was I couldn't lose."

The 57-year-old musician lives and works in Minneapolis. He's traveled the world playing his music. And when he isn't performing, he's working with students, mentoring "kids at risk" who will "take a risk" with him.

But the aggressive cancer put a hold on all that. A liver transplant would be an option if it was done right away. When the first liver didn't work, Wain was put into a coma. Seven days later, a second transplant was successful. The cancer was gone.

"It's a remarkable story," says Wain, "and I'm grateful I'm here to tell it. I was in the right place at the right time, and I was part of a team. We're still a team, because Mayo doesn't forget you."

By his own account, Wain would be hard to forget — the musician-patient who freely shared his gift. "I played everywhere," remembers Wain, laughing. "I'd write songs about the people I met. I'd play my guitar in the hospital, on a gurney, on the way to X-ray. I'd play until the doctor would say 'OK, Wain, you have to stop now.' "

But of course stopping isn't in Wain's makeup. And people need to know more about organ donation. "We need to teach the facts," says Wain. "We need to dispel the myths. That's my job now, myth breaker."