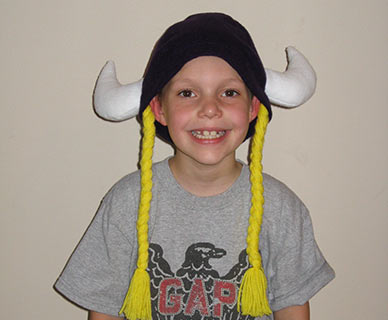 Sporting his favorite Viking costume, Ryan Chubbuck is all smiles, thanks to successful airway reconstruction surgery at Mayo Clinic. "He has been able to play, eat and talk normally and has thrived since the operation," says Ryan's mother, Kelly Chubbuck.

Kelly Chubbuck admits she was a cautious first-time parent. But her motherly instinct told her it wasn't her nervousness that caused her infant son Ryan to breathe noisily and at times, even stop breathing." There were times I had to shake Ryan to get him to take a breath," remembers Kelly. "And it wasn't until I consulted with a specialist at Mayo Clinic that my fears were justified and eventually calmed."

The Chubbucks were referred to Dana Thompson, M.D., a Pediatric Otolaryngologist at Mayo Clinic in Rochester. "Dr. Thompson heard high-pitched breathing – called stridor – and initially suspected Ryan had tracheomalacia (a soft or floppy trachea) so she did a laryngoscopy and bronchoscopy to see what was going on," remembers Kelly.

The Chubbucks were presented with two choices: Ryan could have a tracheostomy placed to create an artificial airway below the obstruction or he could have a special surgery to correct the problem. "But taking Ryan home wasn't an option that day," remembers Kelly.

Past experience guides decision on Ryan's future
Coincidently, Kelly was also born with this condition 23 years earlier. "I had a tracheostomy until I was six years old," says Kelly, who has vague recollections of the experience, except for a kindergarten photo that vividly reminds her of the unsightly tube.

When Ryan first came to her, Dr. Thompson suspected he had a problem somewhere in the airway but recalls, "I wasn't expecting to see as much as I did. Ryan had grade III congenital subglottic stenosis, which is like breathing through a coffee straw – those little straws you stir coffee with," she explains. "Ryan's airway was 60 to 70 percent occluded."

The true incidence of congenital subglottic stenosis is unknown, as many patients who have it are intubated during the neonatal period, thereby exacerbating the stenosis, and making it difficult for otolaryngologists to differentiate congenital from acquired subglottic stenosis. Ryan's is a rare case in that he was born with the problem and never required intubation.

Most cases of subglottic stenosis are acquired from prolonged intubation in premature infants or throat trauma. "The congenital condition is very rare and it's only in the last 15 years that reconstructive surgery has become a treatment option to avoid placement of a tracheotomy tube," says Dr. Thompson, who specializes in laryngotracheal reconstruction for airway conditions affecting pediatric patients.

Historically, like Ryan's mother, patients have a tracheostomy until they either outgrow the condition or have surgery later in life. "The tracheostomy is a limiting option," explains Dr. Thompson. "Children usually have an increased risk of upper respiratory infections and possibly enter school behind in speech and language skills because the tracheotomy affects their ability to talk."

"Based on my experience as a child, we determined that Ryan should have surgery to correct the problem," says Kelly. "I didn't want him to deal with all the challenges of having a tube in his throat and then possibly requiring surgery later in life anyway."

Breathing easy
The day following his diagnosis, Dr. Thompson performed a laryngotracheal reconstruction (LTR) for Ryan. "This procedure increased the size of Ryan's airway by inserting precisely formed cartilage grafts from his rib area into the trachea," she explains. These grafts expand and enlarge the airway.

The procedure was performed when Ryan was only three months old. While many patients require a second revision when they are approximately eight years, Ryan is still breathing easy today. "Ryan was a learning experience for me," explains Dr. Thompson. "I over-constructed his airway when he was an infant to avoid a second surgery." That technique has now been incorporated into the pediatric practice at Mayo Clinic.

"Ryan is a normal, healthy eight-year-old boy," says Kelly. "He has no limitations and I'm grateful that he did not require a tracheostomy like I did when I was young." Ryan has been able to play, eat and talk normally and has thrived since the operation.

Because of Dr. Thompson's knowledge and expertise, like Ryan, many pediatric patients breathe easier each year because laryngotracheal reconstruction is a treatment option offered by the team of airway surgeons in Mayo's Division of Pediatric Otolaryngology. The team works closely with physicians in Pediatric Gastroenterology, Pediatric Surgery, Pediatric Pulmonology, Pediatric Anesthesia and Pain Management, Pediatric Critical Care, Genetics and Child Life Services to provide individualized family-centered care to each child in need.

Dr. Thompson likens her experience with pediatric patients to a roller coaster ride. "There are ups and downs and you just need to jump on and go through treatment with these patients and their families. You need to be there with them ... and there for them."

"When we determined Ryan needed surgery, Dr. Thompson came to his room while we had him baptized to offer her support. Why would a doctor do that?" wonders Kelly.

"These kids become part of my family," says Dr. Thompson. It's not a one-time, one-visit resolution. Ryan was the youngest patient for whom Mayo had ever performed an LTR and his care was ongoing, so I have actually grown up with him."

Hi there, my 1 year old boy just got diagnosed with Grade 3 Subglottic Stenosis and might need surgery to correct the problem. I am looking for any info or help on this issue. Thank in advance

Here’s a video that provides a brief overview of how Mayo Clinic approaches this: http://newsnetwork.mayoclinic.org/discussion/subglottic-stenosis-gasping-for-air-pkg/