Relief for pain caused by Chiari type I malformation 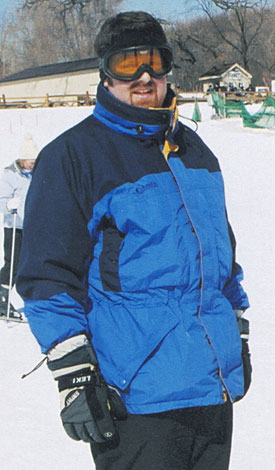 After surgery for a Chiari malformation, Sean Murphy is back to skiing and his other normal pastimes.

When Sean Murphy's chronic headaches set in, they first bothered him after physical exertion, then after a stressful day at work.

Within months, the headaches were constant, always localized in the back of his head. The pain became debilitating.

Murphy consulted his family doctor and was referred to a neurologist. His hometown physicians were stumped.

Murphy was referred to Mayo Clinic, where he was diagnosed with Chiari malformation type I, a rare condition in which the brain tissue at the back of the head protrudes into the spinal canal. The disorder causes a variety of neurological symptoms, but is treatable.

Mayo Clinic physicians initially sought to relieve Murphy's symptoms with medication, but as his health continued to worsen they decided surgery was his best option.

"It was getting to the point where just doing my daily routine was an issue," recalls Murphy. "Not only was I in pain, but I'd been on narcotic painkillers for six weeks with no end in sight. I didn't want to be on painkillers for the rest of my life."

Surgery to treat the condition involves enlarging the existing opening of the back of the skull. Typically, people recover fully within a month to six weeks, and the operation is generally successful lifelong for this condition, says John L D Atkinson, M.D., Murphy's neurosurgeon at Mayo Clinic in Rochester, Minn.

Within six weeks of his surgery, Murphy felt normal for the first time in several months. He was also back to his regular pastimes, including jumping on the family's trampoline with his three kids, sailing, golfing and skiing.

He credits Mayo Clinic with providing superior and speedy care.

"Mayo was phenomenal," Murphy says. "The whole staff was outstanding and everyone was easy to work with. It's a fairy tale how smoothly it all went."

My son is 37—his story is almost identical to Sean’s, but, unfortunately, though he had surgery 2 years ago at the Chiari Care Center in Denver, he still suffers debilitating headaches. He has been having 30-50 botox injections in his skull every 90 days for some relief. The last treatment does not seem to be working. Does Mayo have any further advice? Our son works as a construction superintendent/ has 4 children & a wonderful wife. they would all love to have a normal, active life again.

Editor’s Note:
Thank you for writing. Unfortunately, we cannot diagnose conditions, provide second opinions or make specific treatment recommendations through this website. If you would like to seek help from Mayo Clinic, please call one of our appointment offices (Arizona: 480-301-1735 Florida: 904-953-0853 Minnesota: 507-284-2511) or visit https://www.mayoclinic.org/appointments. You might also consider looking into our Mayo Clinic Connect website (http://connect.mayoclinic.org), where you can communicate with others who may have had similar experiences. You can also read Mayo Clinic expert blogs and take part in educational events.
REPLY

What was the mm measurement of your protrusion?