Deep Brain Stimulation Gets Police Detective Back on the Job 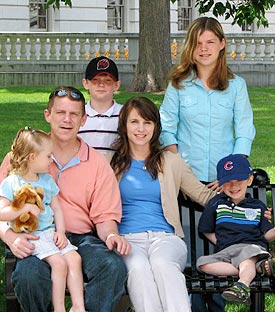 Jeffrey Hughes with his family.

The pain was unbearable, and the questions even worse.

Every month of 2005, Detective Jeffery Hughes of the Madison, WI, Police Department experienced 55 to 60 headaches, each lasting several hours. The headaches brought him to his knees in pain, but it was the recurring question from his daughter that hurt even more: "Mommy, why is Daddy crying on the bathroom floor again?"

The answer: cluster headache, a rare condition considered to be the most intensely painful primary headache syndrome. It sometimes occurs in more than one family member. So when Hughes, now 38, began developing episodic cluster headaches in 1992, he recognized them as the same ailment his grandfather had. For 13 years, Hughes suffered 5 to 7 debilitating headaches a month, an unpleasant pattern but one he learned to tolerate.

In 2005, no one knows why, his headaches suddenly mushroomed to 55 to 60 a month. With two headaches a day lasting for 6 to 7 hours, it didn't leave much time for anything else in his life. His primary care physician tried maximum doses of every medication and therapy--with no lasting results.

"The care I was getting in Madison was excellent, but I was growing desperate," Hughes said. "Nothing helped. I'd burned up all my sick time--even the sick time my colleagues on the force donated to me. As a man who carries a gun for a living, it occurred to me at the darkest hours that there might be a way out of the constant pain. I was so tired of pain, of not being a helpful husband to my wife or father to my four children. I was at the brink."

Hughes' Madison doctor knew colleagues at the Mayo Clinic in Rochester, Minn., were exploring some advanced treatment methods and referred Hughes there. He had a thorough medical exam and consultation in January 2006. After careful conversations with his family and physicians, Hughes decided to undergo a new form of brain surgery first brought to the U.S. from Europe by Mayo Clinic surgeons in 1997. It is called deep brain stimulation (DBS).

Awake for the surgery

Hughes is one of the first patients in the U.S. to undergo DBS for cluster headache--and he is happy he had the courage to make that choice. Like all DBS patients, he was awake, though pain-free, for a portion of the surgery. That way he could answer questions from the surgical team, led by Neurosurgeon Dudley Davis, M.D, to help them correctly identify the electrode implantation site in the brain.

The site of DBS implantation varies with the disorder being corrected. In Hughes' case, the electrode was implanted in the area known as the hypothalamus. Among other things, the hypothalamus helps control sleep-wake cycles and the body's biological clock--systems involved in the cyclical nature of the cluster headache attacks.

The surgery was several hours long, but Mr. Hughes walked out of the recovery room 45 minutes after the DBS treatment to greet family and friends. "The gratitude and relief I felt was just incredible," he says. Three weeks later, he returned to light-duty police work and by 8 weeks, he was on the job fulltime. He continues to have about 6 headaches a month, but he finds this pattern entirely manageable compared to his 2005 headache history. "There's nothing I can't do now," he says. "When I think how dark that year of constant head pain was, it's really just short of miraculous. When I tell my doctors at Mayo that they saved my life, I think they think I'm exaggerating. I'm not."

Hughes' Mayo Clinic neurologist, David Black, M.D. is also pleased with the outcome. "Medications certainly remain the mainstay of treatment for cluster headache," he says. "However, in patients whose attacks do not respond to medications DBS can be a well-tolerated option that significantly reduces pain and suffering." Hughes returns to Mayo Clinic every few months for a check up and to have his brain pacemaker adjusted, if necessary. "DBS is not a cure, but compared with our previous option of destroying the nerve involved, DBS seems to offer better results with fewer side effects," says Dr. Black. "DBS appears to offer a chance for a return to a normal life."