Thoroughness is credited by Canadian for early Prostate Cancer Diagnosis 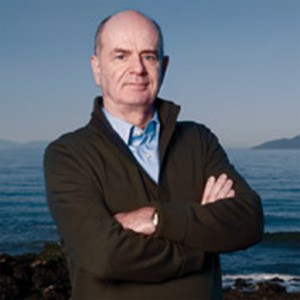 John Henderson of British Columbia is a details man: a Chartered Accountant for whom accuracy and thoroughness are paramount. So while health care is excellent in Canada, about 15 years ago Mr. Henderson, now 62, decided his routine check-ups were not as thorough as they should be for a man approaching 50.

"Every time I thought about where I could go to get a really excellent and detailed complete physical, the name 'Mayo Clinic' kept coming to mind," Mr. Henderson recalls. "I don't know why... I'd never met anyone who went there. I must have read about it as a top institution in the U.S."

On the strength of reputation alone, John phoned Mayo Clinic in Rochester, Minnesota. He explained his interest in getting a thorough routine physical exam and was instantly routed to the International Appointment Office, where the appointment was quickly made.

From the start, Mayo Clinic was a perfect fit for Mr. Henderson because he found the thoroughness, quality and efficiency he values so highly. All the details were covered. "When I got Mayo's results, it was a 2-page response of blood components that provided a very detailed picture. In terms of the exams themselves, I felt quite comfortable, so I kept coming back." When he reached age 50, he shortened the interval between appointments from two years down to yearly appointments.

And he's never stopped being grateful for the change. Mr. Henderson credits the yearly annual exam and comprehensive care he receives at Mayo Clinic with an early detection of prostate cancer about five years ago. "I'm so thankful that I got in a relationship with Mayo Clinic's Executive Health Care clinic," he says. "It was my continued high-quality care that helped me with my positive outcome. The problem with trying to reproduce Mayo Clinic care in Canada or elsewhere is that you have to set up 15 different appointments over weeks or months — and then if you are like me, you'll likely miss 7 of them. At Mayo that doesn't happen. It's all scheduled for you, all the care is in one place, and everything is extraordinarily efficient."

The thought of missing that crucial early exam still frightens him. "Had that tumor just grown and grown, I might not be here to help my five-year-old son grow up. I've got older children, too, ages 16 to 34, who need me in a different way," Mr. Henderson says. "But little G.W., he's my little guy and he's just getting started... he was the one I thought about first when I got the diagnosis."

Details. They make all the difference. And Mr. Henderson continues to revel in life's details — large and small. From making sure he has his annual, comprehensive exam at Mayo Clinic, to cheering at G.W.'s hockey games.

This individual removed himself from his provincial health system some 15 years before his prostate cancer diagnosis. He didn’t think his routine exams were “thorough enough” … and damned if 15 years later, the Mayo didn’t find something wrong with him.

What evidence is there that the diagnosis would not be made if he had continued to receive care and screening from local physicians?

Given that he does not use his local health care providers, what evidence does he have for his claim that “you have to set up 15 different appointments over weeks or months” in order “to reproduce Mayo Clinic care in Canada”?

I’m a woman aged 60, self-employed and very busy. At my last annual general, after my family physician did the usual PAP smear and the rest of the run-down, she directed me to the private lab of my choice for complete blood tests, on a walk-in basis, and a chest x-ray at another lab in the same building, which I could schedule for whatever day I wanted to do the walk-in blood tests, with about two weeks lead time. She wanted me to do the mammogram at the provincial breast screening centre, but that was more running around than I felt like doing and I had never had a problem with the x-ray lab in question (which did send me for follow up ultrasound once before), so she agreed to requisition the mammogram there as well. The lab that does the blood tests also does ECGs, which I had done there a while ago as a precaution given family history. All at zero cost out of pocket, of course.

Exactly how is travelling from British Columbia to the Mayo Clinic less convenient than what I do in two stops, all within six blocks of my home?

Exactly — exactly — what did Mr. Henderson obtain at the Mayo Clinic that was not available to him under his provincial health plan?

And for this routine annual check-up purpose — exactly where and who are these 15 providers I need to see?

How appropriate is it for the great and good Mayo Clinic to post this kind of obviously flatly untrue hyperbole on its website?

How reasonable — how decent — is it for medical services to be rationed in such a way that forgetful executives get every whim catered to on a silver platter, while some people get nothing at all?

Beware health-care-for-profit providers. Your best interests may just not be what they have in mind when they speak.