After Bladder Cancer, this 19-Year-Old Girl gets a New Bladder 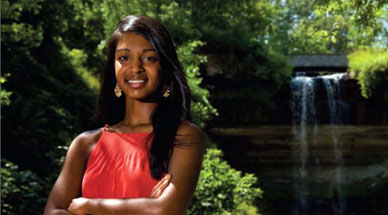 In the fall of 2004, Devi Chettiar was a healthy, active college student. Living in the Twin Cities, Devi was a sophomore who enjoyed her studies at the University of Minnesota. She also actively participated in a dance company and liked spending time with friends.

In November of that year, though, things changed. Devi started having painful urinary symptoms that wouldn't go away. Those symptoms were the beginning of a medical dilemma that led her to Mayo Clinic.

Searching for a solution

Devi first noticed something was wrong when she started to have burning and pain during urination. Soon, sharp abdominal pains began, too. The first doctor she visited suspected a urinary tract infection. When treatment for that didn't help, Devi was referred to a gynecologist, who thought the problem could be kidney stones and referred her to a urologist. More evaluations and tests followed, but nothing decreased the pain.

When painful symptoms persisted, Devi underwent an MRI in December that revealed a tumor on her bladder. A biopsy indicated it was likely benign. Doctors performed surgery to remove the tumor, leaving the rest of her bladder intact.

After surgery, Devi felt much better. But the next development was even more shocking. Her physician had sent a sample of the tumor to Mayo Clinic for a second opinion. After examining the tissue, Mayo physicians reported the tumor was not benign. Instead, it was a high-grade, invasive leiomyosarcoma of the bladder. Further, their investigation indicated that more cancer probably remained in Devi's bladder.

"It was a tough situation because the cancer I had is so rare in my age group. It's almost unheard of," says Devi. "When a healthy 19-year-old has urinary symptoms, cancer is probably the last thing anyone would think of."

"I was stunned," says Devi. "My doctor explained that, because of the severity of the tumor, I had to have my bladder removed. He recommended Mayo Clinic."

Devi and her parents took the doctor's advice, and Devi became one of more than 20,000 Twin Cities residents who come to Mayo Clinic's campus in Rochester, Minn., for specialty medical care each year. An appointment was quickly scheduled with Michael Blute, M.D., a Mayo Clinic urologist.

Dr. Blute confirmed that Devi's bladder would indeed need to be removed to ensure all the cancer was gone. After this surgery, patients usually have to wear a pouch (urostomy bag) outside their bodies to collect urine. But Dr. Blute offered Devi another option. Instead of a urostomy, he could reconstruct her urinary tract and create a neobladder — a new bladder inside her body that would make the urostomy bag unnecessary. Together, Devi and her parents and Dr. Blute agreed on that approach.

"It was comforting to be at Mayo Clinic in the care of world-class physicians and surgeons," says Devi. "I needed a very complicated, difficult surgery — and complications do sometimes happen with it. But I knew I was in good hands. I felt safe."

During the procedure, the surgical team removed Devi's bladder. Then, using part of her bowel, they formed a new bladder and attached it to the urethra. Because they were able to spare the muscles that control urine flow, Devi ended up with a new bladder that functions like the original.

Devi's surgery at Mayo Clinic successfully removed all the cancer. Today, at age 24, Devi remains cancer-free. The only visible sign of her surgery is a small scar on her abdomen. Once again, she enjoys an active lifestyle that includes study and dance. In addition to successful treatment for her cancer, the experience at Mayo Clinic provided Devi with an unexpected benefit: she gained a new purpose for her life that changed her career plans.

Inspired by the thorough, compassionate care she received at Mayo Clinic, Devi changed her college major to health and wellness. After earning a Bachelor of Science degree, she decided to become a physician assistant.

"When I got to Mayo Clinic, I saw how wonderfully the physicians and physician assistants worked together and took such great care of their patients," says Devi. "I knew that's what I wanted to do. I want to be able to provide for other patients what Mayo Clinic provided for me."

Devi is now employed as a certified physician assistant in the Twin Cities.

I was diagnosed with Interstitial Cystitis in 2011. I am 50 but I feel I have had it most of my life. My quality of life I’d nonexistent. My treatments help some but I have no insurance. I am hopeful after waiting 3.5 years to get disability. I have thought about having a new bladder placed nut Ihave hheard other patients say that the condition came back which makes me think it’s systematic. I am desperate. Any suggestions?

Hi, Tamalama. We can’t diagnose conditions or provide treatment recommendations through this website. If you would like to seek help from Mayo Clinic, please call one of our appointment offices (Arizona: 480-301-1735 Florida: 904-953-0853 Minnesota: 507-284-2511). You can find additional information about interstitial cystitis at http://www.mayoclinic.org/diseases-conditions/interstitial-cystitis/basics/definition/con-20022439.

I had the bladder removal and neobladder like this patient for interstitial cystitis 6 years agoaged 30 i northern ireland and ive been fine. No pain whatsoever, symptoms gone best thing i ever did