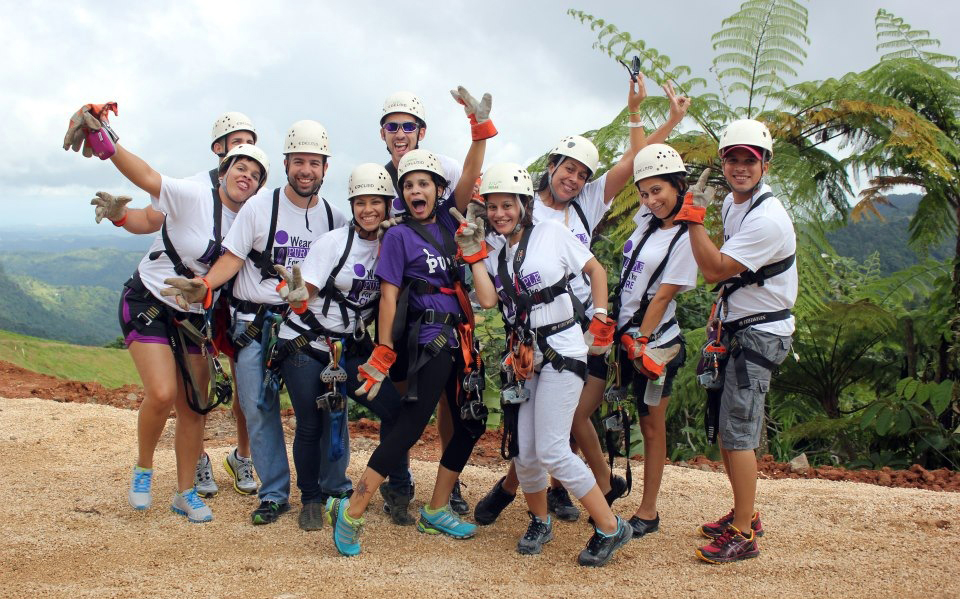 Dorylee Baez (in purple) and a group of friends and supporters from the newly formed Asociación Puertorriqueña del Cáncer del Páncreas enjoy a zip lining adventure at Toro Verde in Orocovis, Puerto Rico.

Whether flying down a zip line or organizing a pancreatic cancer patient group in Puerto Rico, she plunges into life with zest.

The 31-year-old academic advisor at Universidad del Este in Carolina, Puerto Rico, is known as someone who is tenacious, overcoming whatever obstacles get in her way to achieve and achieve her goals.

For instance, Baez attended college while simultaneously working and caring for her ailing mother who was suffering from lupus. After her mother died, Baez pressed on to honor her memory and completed a bachelor’s degree in education and a master’s degree in college-level education administration. But then, at 29, Baez learned she had a large tumor in her pancreas. Not the diagnosis she was expecting when she went to the doctor.

“I thought I caught mono from my niece,” she recalls. A sonogram showed suspicious calcifications in her spleen and her liver. A CT scan and an MRI revealed a mass covering the head of the pancreas.

Baez was shocked. She knew little about pancreatic cancer, but soon learned that pancreatic cancer is the fourth leading cause of cancer-related deaths. It is difficult to treat because it often has no symptoms until it’s at an advanced stage. The location of the pancreas, deep in the abdomen, makes detection difficult even with newer imaging techniques.

“My first thought was that this would bring more suffering to my family,” Baez 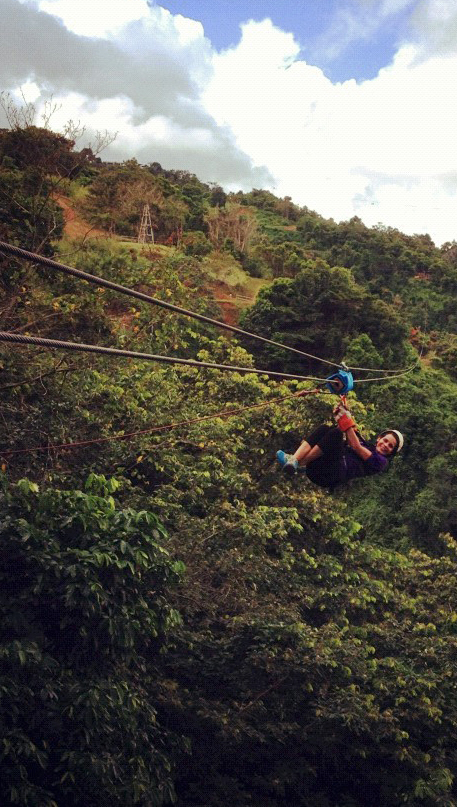 says. “I didn’t know where to turn, but my friends and family stood by me,” Baez recalls.

Doctors in Puerto Rico recommended surgery, but finding a surgeon with the appropriate experience proved difficult. Through a family friend, whose daughter was a physician at Mayo Clinic in Rochester, Minn., Baez learned about Mayo’s campus in Jacksonville, Fla., which had staff skilled in the Whipple procedure, a delicate surgery that could remove the tumor and preserve the healthy parts of her pancreas needed for enzyme and insulin production.

The first stage of the Whipple procedure involves removing about half of the pancreas. Most of the first part of the small intestine (duodenum) is also removed, along with the gallbladder, a portion of the bile duct that drains bile from the liver through the pancreas into the intestines, and in some cases the portal vein, a vein that runs just beneath the pancreas.

The second stage of the Whipple procedure includes reconstructing and reconnecting the remaining parts of the pancreas, bile duct and small intestine, so the body can continue to properly receive and digest food.

During her visit to Mayo Clinic, Baez met with Michael Wallace, M.D., a Mayo Clinic gastroenterologist who specializes in minimally invasive endoscopic procedures and imaging, and Horacio Asbun, M.D., a hepatobiliary surgeon specializing in pancreatic procedures.

The doctors confirmed the tumor in Baez’s pancreas was a very rare type of tumor which usually affects young women. The lesion was pre-malignant, but it could become malignant at any time if not address. Identifying this – in the early stages – was key in helping Baez make a full recovery, Dr. Wallace says.

On Nov. 30, 2011, Baez underwent surgery. “Because the tumor was localized within the head of the pancreas, about 60-70 percent of her pancreas was preserved, allowing for normal pancreatic function,” Dr. Asbun explains.

Six months after surgery, Baez traveled back to Jacksonville and passed her checkup with flying colors. Doctors gave her all-clear to enjoy whatever activities she might like. “I wanted to go skydiving last year, when I turned 30, but I was in the hospital having surgery, so my plans were postponed,” Baez says.

Postponed, perhaps, but not canceled. Baez’s adventures and career plans are back on track with a new sense of purpose. During the last year, Baez has spent her free time trying out new adventures – from riding roller coasters in Orlando to zip lining, parasailing, cave exploring beautiful locales around Puerto Rico.

“I’m a teacher at heart and it gives me great pride to know that my students might see my life as encouragement to achieve their dreams, as I have achieved mine,” Baez says. "If you have clear goals and objectives, you can accomplish anything,” she adds.

About her clinical journey, Baez says she is “more than satisfied” with the treatment offered at Mayo Clinic. “Dr. Wallace and Dr. Asbun explained in detail what was happening and what were the options, so today I can tell my own story,” Baez says. “It was a lot of information, but for every question I had, the doctors and all the staff who took care of me gave me answers,” Baez recalls.

“I feel good; ready to have a great time.”

Hi
What were Dorylee’s symptoms, that prompted her to go to the Doctor??