Mickala the miracle: A survivor and an inspiration 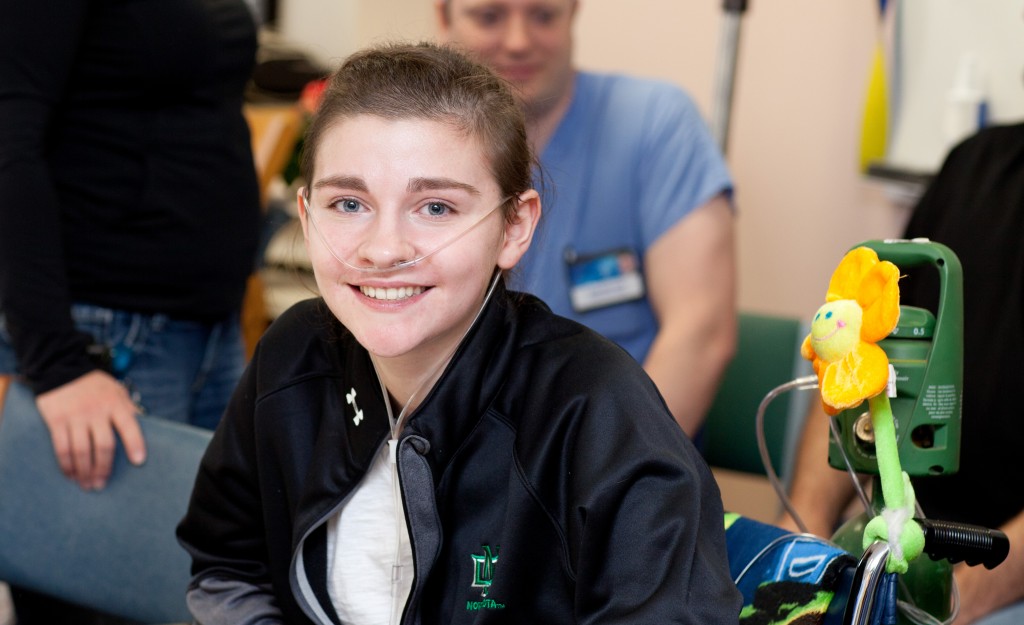 “We knew if she made it to Mayo Clinic, she would make it,” says Judy Morinville of the September day Mayo MedAir airlifted her teenage daughter to Mayo Clinic. Mickala Morinville did make it, and her journey serves as a reminder of the miracles that can happen when you combine Mayo expertise with a higher power and a determined patient.

Mickala was in a dire situation. Her lungs were destroyed, likely by a virus, and Mickala struggled to get enough oxygen. Even getting her to Mayo was a challenge. An extracorporeal membrane oxygenation (ECMO) machine was oxygenating Mickala’s blood. Because of the complexity of transporting these patients, most cannot move to another facility. Thankfully, Mayo MedAir has expertise that made her trip to Mayo possible.

As her parents made the stressful drive from their home in northern Minnesota to Rochester, Roxanne Pike, M.D., Anesthesiology, and Rakesh Suri, M.D., D.Phil., Cardiovascular Surgery, were busy in the operating room trying to save their daughter’s life. They stabilized Mickala and placed her in the care of the staff on the intensive care unit.

Still, Mickala struggled. Even with an ECMO machine helping oxygenate Mickala’s blood, she was not getting enough oxygen to recover. Her health continued to deteriorate, and Mickala eventually landed on the heart, lung and kidney transplant lists.

“Things were looking very desperate. She had renal failure and was on dialysis. Her heart wasn’t functioning properly. And she had severe lung injury without recovery after six weeks,” says Gregory Schears, M.D., Anesthesiology, who lead Mickala’s care team and is the medical director of the ECMO service. “Honestly, if you would’ve had that situation a couple of years ago, we would have withdrawn support.”

But, the team wanted to fight for the young patient with so much in front of her. Mickala’s team gathered to discuss the options. Eventually, they decided to move the tube connecting her heart to the ECMO machine directly into her chest. It was risky move, but one Mickala’s family and care team were willing to try. “If anyone could do it, we knew she could,” says Dr. Schears. “And something just said we should really go to the wall.”

“Scott and I sat downstairs and waited for that surgery to take place, not knowing what the outcome was going to be,” says Judy. “Dr. Suri came and talked to us before the surgery and he just basically said I’m going to do my best but ultimately it’s out of my hands. Its up to a higher being than we are.”

In retrospect, these tense moments were the start of Mickala’s fight back.

Repositioning the tube allowed Mickala to finally get enough oxygen. “It was the best thing that could happen,” says Dr. Schears. “Over the ensuing weeks, we saw recovery of her heart, recovery of her kidneys. And improvement of her lungs.”

After 116 days, Mickala was finally strong enough to leave the ECMO machine. She moved to a rehabilitation unit in February, and finally in April, she was ready to go home a record holder ­– 116 days is the longest anyone in the country has been on ECMO and left the hospital. “This prolonged duration of ECMO support was possible because of the amazingly talented people we have involved in her care,” said Dr. Schears.

However, that record is a small part of the legacy she leaves with her care team and fellow patients. “She’s a go getter. She’s got a lot of energy and a great attitude,” says Dr. Schears. “Once she became mobile, she would visit other patients. She helped spread some of her energy to other people.”

Her departure came complete with heartfelt goodbyes, threats to crash her upcoming prom, balloons in Mickala’s favorite colors and recounts of her long journey, making it clear that Dr. Schears sentiment was shared by an entire care team that Judy estimates numbers in the hundreds.

She drove away from the hospital giving her care team the classic Mickala thumbs up and a sense of gratitude for her care team. “I owe a lot of this to the team here. If one person was missing, it just wouldn’t be complete from the therapists to the doctors to the nurses who saved my life,” says Mickala. “I can’t even express or thank them enough for all they’ve done, not just cared for me, but been my friend through this really long journey. That definitely kept me going.”