During a hospitalization for pneumonia more than 20 years ago in her hometown of Barrington, IL, Ilse Hein received very frightening news: she had multiple myeloma. Initially she understood that she had a skin cancer (a melanoma), though she soon learned that multiple myeloma was actually very different: a complex cancer of the bone marrow. 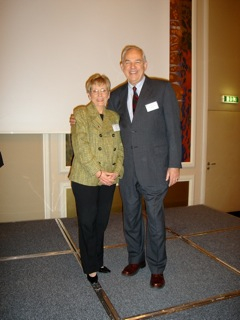 Soon thereafter, encouraged by her local physician, Ms. Hein traveled the 5+ hours (drive time) to Rochester and spent a week at Mayo Clinic. There her diagnosis was confirmed and compounded by more bad news: the care team discovered that she also had an incurable non-alcoholic liver disease. One week later she underwent major surgery.

Subsequently Ms. Hein was assigned to Dr. Philip Greipp (hematologist) and Dr. Patrick Kamath (hepatologist). They became her guides during her cancer journey. Ms. Hein stated: “Both doctors explained the diseases in detail without instilling panic. They helped to ease my fear with their knowledge, empathy, kindness and concern, and openness. They worked together as a team, and that instills further trust and confidence. Receiving such excellent, custom tailored care and attention always makes me feel like I won the lottery.”

Multiple myeloma is still incurable but has become more and more treatable within the last 10 years. During the early stages of the disease, the treatment plan was one of surveillance. Eventually Ms. Hein’s Mayo Clinic team recommended that she participate in a novel drug therapy trial. Fortunately, her myeloma improved. At the same time, Ms. Hein decided it was time for her to help others. With the help of her Mayo Clinic myeloma specialist Dr. Greipp, well known and respected in his field, she started the first multiple myeloma support group in her home country of Austria. The support group members helped each other to live with and conquer their disease by sharing their experiences and feelings. They learned to be thankful for each day rather than dwelling on the future. Ms. Hein also founded the European Myeloma Platform and became active in getting new therapies approved by the European FDA. Today, she attends disease-oriented conferences and workshops and speaks to groups at cancer association meetings as far away as New Zealand.

Ms. Hein’s story is ongoing. She was beating the myeloma odds, yet she and her care team stayed vigilant. And during a return to Mayo Clinic for a checkup, she ran into yet another obstacle: breast cancer. After more surgery, she’s once again winning the battle with the help of her Mayo Clinic providers. Today that team includes myeloma, liver disease and breast cancer experts. They are all working together to coordinate treatments and ongoing testing as well as to help her to cope and stay positive.

Ms. Hein’s message to other cancer patients is:
“Choose a knowledgeable cancer team and specialist you can trust. You will need someone who is always there for you through your cancer journey. Also be sure to seek support from others and never ever give up.”