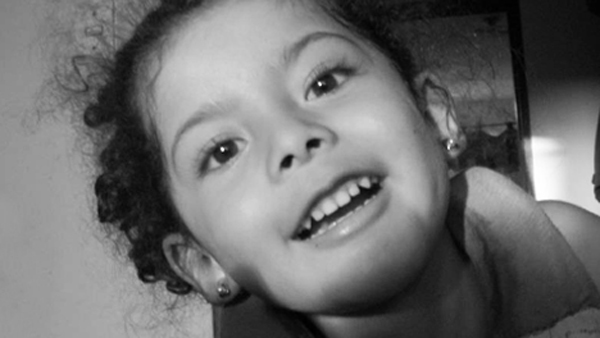 After Mehta casting at Mayo Clinic, 3-year-old Sofía Egües saw the curvature of her spine reduced from 60 to 35 degrees and has taken steps she was previously unable to.

Three-year-old Sofía Egües has progressive infantile scoliosis. In November 2012, despite having received treatment with a brace during her first years of life, Sofía had a spine curvature that had already reached 60 degrees.

The specialists in her hometown of Lima, Peru, said Sofía required corrective surgery, which involved implanting titanium rods along her spine, as well as maintenance surgeries every six months. Ultimately, they said, an early fusion of the spine could be performed at age 8 or 10.

"I was absolutely certain that this would destroy the future, the body and possibly the spirit of my daughter," says Ismael Egües, Sofía’s father. "We immediately looked for another alternative to avoid the surgery to correct Sofía’s spine curvature.”

The search for alternative solutions for little Sofía at first seemed an impossible task.

A method known as "Mehta casting" -- a noninvasive treatment that doesn’t require performing surgery on a delicate child’s body -- was identified as the best solution. Mehta casting is a treatment whereby a cast is placed around the spine and body of the child to hold the spine straight while the child grows. But physicians in Peru and the rest of South America were unfamiliar with the procedure, and the hope of little Sofía and her family began to dim.

Not ready to give up hope, then family “sent emails to physicians all over the world,” says Ismael.

Noelle Larson, M.D., of Mayo Clinic's Department of Orthopedics in Rochester was one of the many physicians who received the Egües family email, and she reviewed Sofía’s case. Shortly afterward, she confirmed the viability of the Mehta casting procedure, which could be done at Mayo Clinic in Rochester, Minn., with follow-ups every two or three months for one year.

Traveling to the U.S. every two or three months to receive treatment, however, was not within the family's financial capability, Sofía's father noted. 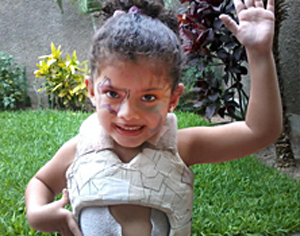 Ismael Egües and his family requested help from Heather Hyatt-Montoya, founder of the Infantile Scoliosis Outreach Program, which connects families of children with scoliosis with resources and information to help them make the best choices possible in the care of their child. The lack of physicians or institutions certified to perform the procedure in South America prompted the organization to offer free training, at Cincinnati Children's Hospital, to Dr. Raúl Macchiavello, chief of the Spine Unit at the Clínica Hogar San Juan de Dios and Sofía’s personal physician in Peru. The training would not only benefit the physician and little Sofía, but also many future patients.

Funds raised through a charity concert, along with support provided by American Airlines with the donation of two tickets for Sofía and her parents to travel to Mayo Clinic, made the treatment possible. The amazing teamwork of several people covered the cost of all travel expenses, lodging and translators to enable Dr. Macchiavello to receive training.

Dr. Larson was in charge of facilitating Sofía's first treatment of Mehta casting at Mayo Clinic in Rochester. The use of a brace decreased Sofía’s curvature 10 degrees. After the Mehta casting procedure at Mayo, Sofía’s curvature decreased from 50 degrees to 35 degrees. The change on the X-rays was impressive, as were the changes in Sofía’s life. Sofía used to limp due to the trunk shift caused by the scoliosis, but a few hours after the procedure, the limp improved by 70 percent.

Sofía now has more balance in her body, which is evident when she walks or plays. As the days went by, her progress was clear. Sofía was walking faster than before, and her achievements during the physical therapy sessions were indisputable. After she returned home, Sofía was able to stand on the tips of her toes, which she had never been able to do. Just a couple of weeks later, she descended a set of steps by herself for the first time.

Dr. Macchiavello now has an EDF Casting Frame, a special operating room table required for the early Mehta casting treatment. DHL Global Forwarding in Perú, American Airlines and HP worked together to have the equipment ready to provide continuity to Sofía’s treatment. This also will allow more children in Peru to receive early Mehta casting treatment for progressive infantile scoliosis.

"Many children in our country can now hope to grow, develop and be as happy as any other child in the world”, says Ismael Egües.

"All this was possible thanks to the generosity of many people in Peru and other parts of the world who joined us in our journey, and especially because God wanted it to happen. There are three people that deserve to be individually mentioned, Dr. Min H. Mehta for developing the technique, Dr. A. Noelle Larson from Mayo Clinic for her pivotal help in initiating the process, and Heather Hyatt-Montoya from ISOP for her big heart,” Ismael Egües says.