A lifetime of lessons in 20 short years 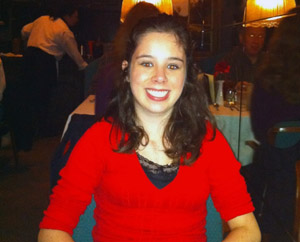 It hasn't been an easy path for Ashley Jagodzinski. To say the least. So you'll pardon Ashley and her mom (Mayo employee Erin Jagodzinski) if they're a touch enthusiastic about Ashley officially starting her college career this fall.

A few things conspired to stop Ashley from getting to this point. Three open-heart surgeries by age 12 (the first, at just 6 months of age). Juvenile rheumatoid arthritis. A stroke. A brain hemorrhage. Seizures. And, astoundingly, and sadly, bullies who picked on Ashley for missing school when her physical difficulties took a toll.

Ashley and her family turned to Mayo Clinic often during those years. And at age 17, after suffering a stroke, seizures and a brain hemorrhage, Ashley and her family moved to Rochester to be closer to Mayo. "Mayo Clinic has been repeatedly saving my life for over 20 years," says Ashley, who admits she's a "very specialized" patient. "My heart surgeon, Dr. (Francisco) Puga (now retired), performed all three of my open-heart surgeries. Dr. (Allison) Cabalka has been my cardiologist for 14 years. It's the knowledge and specialization of Mayo that has helped me."

Along the way, Ashley and her family also discovered online education, first in the form of Arizona Virtual Academy, which she began attending at age 15. It was a godsend, allowing her to continue her education when she was no longer able to attend school. "It was the perfect school for me," Ashley said in a recent interview with WCCO-TV in Minneapolis. After moving to Rochester, and taking a year off school to concentrate on recovering, Ashley continued her education at Minnesota Virtual Academy, graduating this past spring with honors. She even delivered the school's commencement speech, finding a receptive audience as she told her story to her virtual classmates who had gathered in the flesh in Bloomington, Minn.

A key part of that story is Ashley's "amazing support network," she says. "My parents are the ones who are solely responsible for the person I am today. My strength comes from them." She quickly adds her caregivers at Mayo to that list. "I receive so much encouragement from those that see me at Mayo … They have seen me at my worst and they want to see me at my best. Each of them has given me words of wisdom and/or encouragement that I cherish."

And about those bullies? Well, "those kids aren’t being interviewed right now, you know?" Ashley said when speaking with WCCO-TV. "It just made me who I was."

Ashley plans to finish her associate's degree this fall -- she's just one semester away from that goal -- and then pursue her bachelor's degree. One day, she says, she hopes to be a motivational speaker.