For One Couple, Expert Neurology Care Makes All the Difference 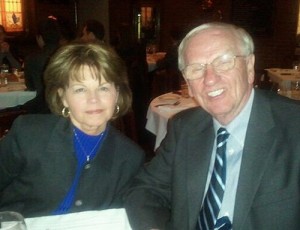 In one brief statement, Barbara Smith can sum up the impact that the staff in the Department of Neurology at Mayo Clinic in Arizona had on her and her husband as they faced several difficult and frightening medical problems: "They are our life-changing heroes."

For 40 years, seizures were just part of life for Barbara. Dealing with them since she was a teen, she always assumed they were caused by epilepsy. But in 2007, the seizures became more frequent and more severe. At the same time, Barbara began having other problems, too. She developed a stutter and often had headaches. Walking became more difficult, and she had unexplained weight loss.

Barbara went to several neurologists. No one could provide her with answers. In desperation on a Friday evening, Barbara's husband, Jim, called Mayo Clinic to see if they could get an appointment. "That phone call changed my life," says Barbara.

Within a week, the couple arrived at Mayo Clinic in Arizona, where Barbara underwent two weeks of evaluation, including five days of observation in the hospital's epilepsy monitoring unit. Part of that evaluation involved using unique imaging technology known as SISCOM, or subtraction ictal SPECT coregistered to MRI. Pioneered at Mayo Clinic, SISCOM is particularly useful in pinpointing areas of the brain where seizures occur.

What the evaluation revealed was a surprise. Barbara's seizures were being triggered by scar tissue in the temporal lobe of her brain. That scar tissue appeared to be the result of a bout of spinal meningitis Barbara had suffered as an infant. It likely had been there all along, she says.

Although it was a relief to have an explanation for her symptoms, the recommended treatment sounded daunting. With medication unlikely to provide much help, the best option was for Barbara to have brain surgery that would involve removing three and a half inches of scar tissue from the temporal lobe.

"I will never forget how the staff in Neurology came to check on me when Jim was in the Emergency Department ... They wanted to make sure I was okay and to remind me to continue to take care of my own health, too." - Barbara Smith

"Initially, I was hesitant to have the surgery," she says. "But the alternative would be to continue to have neurological problems. I'd probably be in a wheelchair and perhaps need to go to a care facility for the rest of my life. I was only in my early 50s."

Barbara did decide to go ahead with the surgery, and the results were more than worth it. Since then, she has not experienced any seizures, and her other symptoms have disappeared.

"I am ready to dance! It is wonderful to have so much more independence in all areas of my everyday life," she says. "Many thanks to my team of neurologists and neurosurgeons at Mayo Clinic. I am forever blessed." And she sends an extra measure to her "key doctors" — Richard Zimmerman, M.D., Neurologic Surgery, and Katherine Noe, M.D., Ph.D., Neurology — and their and staff assistant, Terry Wozniak, a medical secretary in the Epilepsy Clinic, who Barbara calls the "glue that holds the whole operation together."

But in an unexpected twist, that's not the end of the Mayo Clinic story for Barbara and Jim. When the Smiths returned to Mayo for Barbara's one-year checkup after surgery, Jim began having severe headaches, became confused and seemed to be experiencing other cognitive problems. Barbara brought him to the Emergency Department at Mayo Clinic Hospital. Within hours, the neurologists discovered Jim had a brain tumor.

Although lab assessment revealed the tumor was not cancerous, it did have a significant effect on Jim's daily life. For a time, he was unable to walk, talk or feed himself. But under the direction of his Mayo Clinic physicians, treatment with medication along with rehabilitation eventually allowed Jim to return to his usual activities. Five years later, his situation has improved significantly and, according to Barbara, "He is feeling very blessed because of the superb treatment he received at Mayo Clinic."

As she reflects on their experiences at Mayo, Barbara has no trouble identifying the most memorable aspect: the people. In fact, she says, one experience, shortly after she brought her husband to the Emergency Department, really sums up the care and concern she saw in her caregivers at Mayo.

"I will never forget how the staff in Neurology came to check on me when Jim was in the Emergency Department," she says. "It was such a scary time. They wanted to make sure I was okay and to remind me to continue to take care of my own health, too. I can't say enough good things about the staff. They are just amazing people."